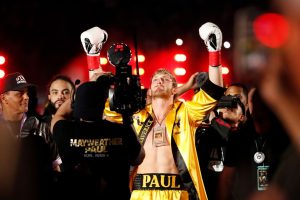 Logan Paul was seen wearing a 'million dollar' Pokemon card round his neck during his ring walk to face Floyd Mayweather.

The YouTube star impressed against the 50-0 undefeated boxing icon and held his own to make it through eight rounds of action.

Many expected Mayweather to claim an easy victory against the inexperienced 26-year-old, but Paul rose to the challenge in style.

Paul may well have been given a helping hand by his very own Charizard Pokemon card, which he wore during his ring walk.

Fans were unsure as to why he chose to wear this prior to the bout, but the American explained it has played a significant role in his life so far.

“It’s a BGS 10 Charizard, first edition Charizard,” he said in a post-fight interview.

Paul purchased the card last October for $130,000 (£91,783) but is now convinced the rare item has risen dramatically in value.

Were you surprised by Logan Paul's performance vs Mayweather? Comment below.

He said: "Estimated value? Now? This is a million dollar card, baby.

"This is the card that I walked out with to the Floyd Mayweather fight. This is a million dollar card. Get a close up.”

Paul is partly responsible for the sudden frenzy around Pokemon cards, having made several YouTube videos showcasing his collection and promoting the idea of investing in rare items.

He has previously shed light on his obsession for Pokemon on his Instagram, writing: "Being able to enjoy something that I've loved since childhood now as a grown man is like buying back a piece of something I could never have."