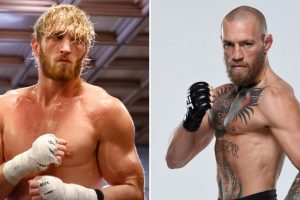 Logan Paul has stated UFC megastar Conor McGregor “doesn’t impress” him and claimed he could defeat the Irishman in a boxing match right now, just days before the YouTuber faces Floyd Mayweather in an eight-round exhibition bout.

Paul, who was defeated in his only professional boxing bout in 2019 by fellow YouTuber KSI, appeared on the True Geordie podcast earlier this week.

In a wide-ranging interview, the social media star appeared extremely confident as criticised the boxing ability of former two-weight UFC champion McGregor, perhaps paving the way for a fight between the two in the future.

“I think I could beat Conor in a boxing match right now. Conor doesn't impress me. He gets tired.

“He’s a great athlete and a great performer, but I don’t know man. One day we’re going to get good enough at this sport where conversations like this are happening and we’re better than these guys.”

Paul went on to discuss how he thought the upcoming fight with Mayweather would go, and the YouTuber was characteristically bullish in his predictions.

Do you think Logan Paul would stand a chance against Conor McGregor? Let us know in the comments section below.

“I’m going to knock him out and become the greatest boxer on the planet. Then I’m going to retire and not give Floyd the rematch.

“Everything that I’ve portrayed online says the same thing. But we’re really about this life now. Floyd underestimating me is going to hurt him.”

Paul also addressed Mayweather’s prediction that he would knockout the YouTuber, laughing off the threat of the former Olympian’s punching power.

“With all due respect, Mr. Mayweather, what the f**k do you know about knocking people out?

On his way to retiring with an unblemished 50-0 record, Mayweather won 27 of his fights via stoppage. These included his controversial knockout of Victor Ortiz, as well as victories over Conor McGregor, Ricky Hatton and the late, great Arturo Gatti.

Floyd Mayweather vs. Logan Paul is set to take place this weekend on June 6 in Miami, Florida.

Headlined by an exhibition between 50-0 Mayweather and 0-1 Paul, the card also features Badou Jack vs. Dervin Colina, the boxing debut of former NFL star Chad ‘Ochocinco’ Johnson, and the return of Viddal Riley, who many may know as the former boxing trainer of YouTuber KSI.