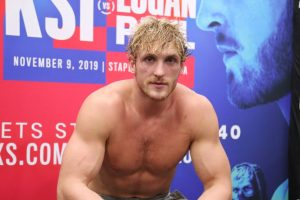 Within hours of the event being announced, YouTube star Logan Paul was already mocking Floyd Mayweather ahead of their proposed fight in June.

In the early hours of Wednesday morning, UK time, it was confirmed that Paul and Mayweather would be taking part in an exhibition fight at Miami’s Hard Rock Stadium.

With Mayweathwer standing at just 5 ft 8 inches and Paul 6 ft 2 inches tall, there is a noticeable size difference between the men.

So it is no surprise to hear that both have agreed to different weight limits for the bout on June 6.

Mayweather, who is considered by many to be the best pound-for-pound fighter of his generation, weighed in for his last fight against Conor McGregor at 149.5 pounds, well under the 154-pound limit, and has been told he can go up to 170lb for this one.

As for Paul, he has only fought professionally once and that was against another YouTuber KSI, who beat the American by split decision.

Paul weighed in just inside the 200lb cruiserweight limit for the fight with KSI, at 199.4lbs, and has been told he can go to 190lbs against Mayweather.

And just hours after the ‘Bragging Rights’ event was announced, Paul posted an edited promotional poster which showed Paul as you would expect but next to Mayweather who had been shrunk, taking up a small amount of space at the bottom of the image.

The mock-up poster was accompanied by a social post which simply read: “**to scale**”

It came shortly after Paul had posted another message, saying: “Full transparency my mom is terrified.”

As for Mayweather, he announced the fight on his social channels with a caption which referred to the fight location, promotional companies, the going on sale next week and how it would be ‘an epic event’ but there has been nothing else since.

Mayweather’s last fight against an established professional boxer came in September 2015, when he beat Andre Berto by unanimous decision to retain his welterweight world titles.

It enabled Mayweather to move to 49 wins without defeat and his fight two years later with McGregor – who had never fought as a boxer professionally before – allowed him to move to 50-0.

Many boxing purists were unhappy that Mayweather decided to fight McGregor, despite the UFC star being a two-weight world champion in MMA.

But as someone who often refers to himself as ‘Money’, Mayweather has shown he is happy to chase the cash despite what boxing fans think.

His last appearance in a ring came on New Year’s Eve in 2018, when he defeated 20-year-old kickboxer Tenshin Nasukawa inside the first round in Japan, to earn £6.5 million for just 139 seconds’ of work.

His brother Jake Paul – himself a YouTube star – has also fought professionally on three occasions, with his last bout coming on April 17 when he knocked out former UFC champion Ben Askren inside two minutes.

Askren is 36 and was clearly out of shape for the contest but Jake Paul recently revealed it resulted in 1.5 million pay-per-view buys and made £54 million in PPV sales.

Whilst many boxing purists will continue to be frustrated by YouTubers dominating column inches, the financial rewards for those who take part are clear.

In March, Mayweather explained to the Disruptive Entrepreneur podcast : “I can fight a fighter right now and I can guarantee myself $35million.

“I can eventually probably make $50million, for just a regular fight.

“Or me and Logan Paul can go out, entertain, have fun and make nine figures, $100million or more.

“Everybody thinks that ‘retired’ means at home with your feet up and picking up weight.

“I prefer to go out, still entertain and have fun.

“Just because I still go out, entertain and have fun doesn’t mean that I still wanna fight for 12 rounds.

“I think we’ve got a six-round exhibition. I think it’s gonna be very entertaining for the people, I think people are gonna love it.