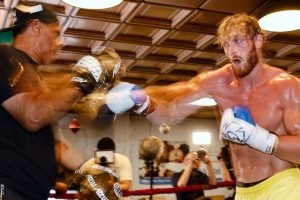 The YouTuber is without a win as a professional boxer after losing his debut to fellow internet star JJ 'KSI' Olatunji in 2019 – but will fight one of boxing's greatest ever at the Hard Rock Stadium in Miami on Sunday.

And Paul has no plans to stop there as he targets bouts with former UFC double champion McGregor as well as former title contender Diaz.

Speaking at a media workout ahead of fighting Mayweather, Paul even admitted that he would be willing to square off with his brother Jake, who is 3-0 with 3 KOs and faces Tyron Woodley on August 28.

"I love Conor McGregor, love him," he said at the famous Fifth Street Gym. "I'd love to fight him too one day, one legend at a time.

"I'd love to fight the Diaz brothers [with Jake], they're on the list too!"

Paul has claimed that even just fighting Mayweather is 'a giant finesse', adding to reporters that while he's still planning on stopping the boxing legend, he has enjoyed 'the journey'.

And he also refuses to believe that the bout is even happening until he's standing across the ring with Mayweather, saying that he is afraid that his opponent may pull out.

“This whole thing is surreal," he added. "Everything about it. I told my manager and we kind of had an inside joke that until I get in the ring with him, I didn’t think this fight was happening.

"But I think it’s safe to say that I can believe it now. I think it’s happening. It’s fight week. I can’t imagine Floyd would back out now, but who knows? Old man fakes an injury. Gets scared of the big kid. I’m excited."

Paul has previously claimed that due to the unsanctioned nature of the bout, which has rules including no declared winner and 12oz gloves, he will face a special sanction of a $100,000 deduction for every pound he misses at his limit of 190lbs.

But he says that he is on track to make the limit and weigh in at 30lbs heavier than Mayweather, who will be welcome to come in ta 160.

“Weight is great and we’re about at 195," Paul confirmed. "Energy is great and I feel strong, fast, sharp. I have no complaints. This is the best shape I’ve ever been in.

"And I need to be because it’s an eight-round fight. It’s the longest fight I’ve ever fought. So I have to be ready.”

There will be knockouts permitted in the bout, although there won't be judges at ringside and should it go the distance, no winner will be declared officially in the ring, similar to the Mike Tyson v Roy Jones Jr exhibition last November.