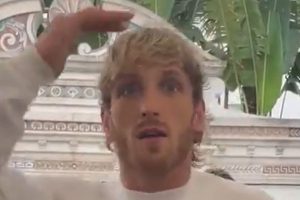 Logan Paul has fired a fresh dig at UFC superstar Conor McGregor with a jibe about the Irishman’s shorter stature in comparison to himself.

YouTuber Paul is preparing to take on Floyd Mayweather in an exhibition boxing bout on Sunday night, but has continued to take aim at McGregor.

McGregor has been linked with taking on either Logan or his younger brother Jake at some point in the future, with both Paul brothers calling out the UFC star.

After losing an exhibition boxing match of his own against Mayweather in 2017, McGregor has returned to the Octagon in recent years.

But rumours linking him with a fight against one of the Paul brothers have increased since he was defeated by Dustin Porier at UFC 257 in January.

Logan’s bout against Mayweather will be just his third fight, and his first against a professional, with the 26-year-old widely expected to lose.

But those low expectations of his hopes for a win over the boxing legend has done nothing to tone down Paul’s confidence that he could defeat McGregor.

His latest dig towards the Irishman concerns the latter’s shorter height and slimmer frame, with Paul branding him a “small guy”.

“Conor McGregor…. Me,” he told Bleacher Report, while also making hand gestures showcasing the differing builds between himself and the Irishman.

Paul’s latest attack on the UFC star comes just days before his bout against Mayweather at the Hard Rock Stadium in Miami.

Despite the rumours linking him with a return to boxing to face one of the Pauls, McGregor appears to be committed to UFC.

The 32-year-old will take on Poirier at UFC 264 in July to complete their trilogy series, following his loss to the American in January’s fight.

READ MORE: Floyd Mayweather vs Logan Paul will have 'no winner or judges' as ruling made on knockouts