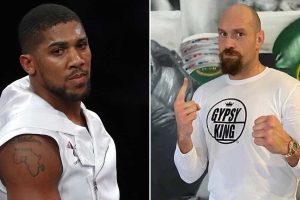 Now the dust has finally settled on the collapse of Anthony Joshua against Tyson Fury – it is time to open our eyes to what lies ahead.

That is two potentially brilliant heavyweight fights and then we still may get the big one before the end of the year.

The fallout from the undisputed clash being scuppered by Deontay Wilder's arbitration victory has brought out the old cliches.

“Another nail in the coffin of the sport”, they say.

It must be some sized coffin because there's been an incredible amount of nails rammed into it.

Yet here we are looking at a summer showdown between WBC king Fury and Wilder in Las Vegas, a city vibrant again following Covid-19 lockdown.

Then we turn to September when Joshua looks set to defend his WBA, IBF and WBO belts against Oleksandr Usyk.

That is two Olympic gold medallists from London 2012 squaring off.

A heavyweight fighter who has three pieces of the world title against a man who was undisputed ruler at cruiserweight.

And it could be in a football stadium full of fans champing at the bit for a big event after months of lockdown.

It is a clash that may not be a fight of the year contender because of how it will play out. But the intrigue is there.

Will Usyk be able to take the power of a huge heavyweight like Joshua and if he can will the Brit be able to pin down the slick Ukrainian enough times?

It could end early if Joshua turns out to be too big and too strong for the unbeaten Usyk but it could end up being the toughest fight of his career.

On paper, Usyk is certainly his second biggest challenge behind Wladimir Klitschko. And there's not much between them.

While over in Sin City, something can always go wrong. Fury destroyed Wilder back in February 2020.

The American may never recover from it and could be thrashed again by the Gypsy King.

Yet he still possesses a powerful right hand and the longer you spend in the ring with the Alabama man the more risk you are of it landing on you.

If it detonates on Fury's chin then it could cause an explosion that turns the heavyweight division on its head.

We may have to wait a little longer for the main course which is the undisputed fight, but they are two decent appetisers that's for sure.