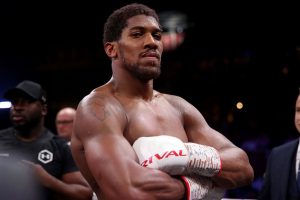 Anthony Joshua called Tyson Fury 'Luke' in a social media dig at his rival after it was claimed the WBC champion changed his name to sound harder.

The heavyweight rivals were involved in a Twitter spat this week after their scheduled undisputed clash was thrown into jeopardy.

Fury and Joshua were set to clash in the Middle East on August 14 with all the division's belts on the line.

But WBO, WBA and IBF King was fuming after a judge ruled that Fury must first fulfil his contractual obligation to a trilogy rematch against Deontay Wilder.

Fury was branded a "fraud" by Joshua – to which the Gypsy King replied by challenging his rival to a bareknuckle fight.

"If there was an arbitration going on, why announce to the world we are fighting!" Joshua blasted on Twitter.

"The fight was signed! UNDISPUTED. Bare knuckle? You’re a good kid, don’t play with me Luke! I’ll slap your bald head & you’ll do nothing! Waste man."

Fury hit back, reiterating his call for a bareknuckle fight as he tweeted: "Your full team knew there was an Arbitration going on, it was out of my hands! But i tell you what if i’m a fraud let’s fight this weekend bare knuckles till 1 man quits? let’s put up 20 mill each!!!"

Whyte claimed back in December that Fury had changed his name to make himself "more sellable" within the sport.

Luke is Fury's middle name, as listed on Companies House and Boxrec.

“He changed it to Tyson to make himself sound harder.

“In boxing, the name Tyson is a lot more sellable than Luke.

“A lot of what Tyson does and says is a game, you can never take anything he says seriously or at face value."