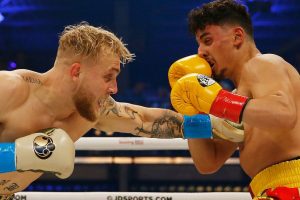 It’s been almost 18 months since Jake Paul began his professional boxing journey against AnEsonGib – and now the YouTuber’s first ever opponent is making his comeback in the ring.

Fellow social media star AnEsonGib, whose real name is Ali Al Fakri, was no match for Paul in January 2020 with the Saudi Arabian-born British fighter having to concede defeat inside the first round.

Paul has gone on to challenge – and beat – NBA star Nate Robinson and MMA legend Ben Askren and is now looking to extend his professional record to 4-0 when he takes on Tyron Woodley in August.

AnEsonGib, on the other hand, has seen his boxing career stall and returns to the ring this weekend for the first time since that chastening defeat to Paul last year.

The 24-year-old will take on TikToker Tayler Holder, with the two men facing off at a YouTube vs TikTok boxing event in Miami this weekend.

Gib wants to right the wrongs of his bout against Paul and is seeking redemption in the ring against an opponent who some insiders claim is the best technical boxer at the competition.

Will AnEsonGib taste victory in his bout against Taylor Holder this weekend? Let us know in the comments section.

In an interview with the Daily Mirror, Gib said: “I'll let them go with this narrative that he's the most experienced.

“That's the opponent I'd like, but I don't actually think he has the experience.

“He's had no fights, from what I know. And even if he has I've been there before on the big stage three times, I fought twice before I faced Jake Paul, so I'm the most experienced one!

“I've got a different hunger for this fight, I'm coming off the loss, I've put the work in, many of these other YouTubers don't that, they've said they're doing it for money.

“I'm not doing it for that, I know I call myself 'seven figure Gibber', that's cool, that's bravado, but I'm here for redemption because I've been here from the beginning.”

READ MORE: Euro 2020 stars punching above their weight with WAGs from Harry Maguire to Luka Modric