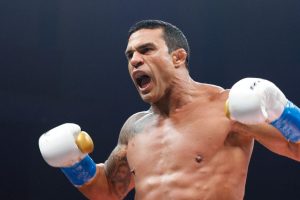 Jake Paul is seemingly not interested in a fight with Vitor Belfort, as the internet star issued a plain response to his $30million call out.

Former UFC star Belfort stopped ring legend Evander Holyfield last night in Florida. It was Belfort's first win inside the ring since his boxing debut in 2006.

Belfort wasted no time in calling out internet star Jake Paul after the win, with Triller co-founder Ryan Kavanaugh putting a massive offer on the table for 'The Problem Child'.

And Belfort said after his win: "We've got $25m. Winner takes all! Let's go Jake Paul, stop running from me. He earned my respect, but he's still a Disney kid! Let me teach you a lesson.

"You better start training, all of your fans are going to be Vitor Belfort fans. I've got family, you don't have family… America needs me, not you!"

Kavanaugh then upped the offer to $30m.

Paul has become one of the most talked about names in combat sports since the rise of celebrity and YouTube boxing in the past year.

The pictures – which showed Silva knocking out Belfort in their 2011 fight – were captioned: "Congrats Anderson Silva. Always been a KO artist. Goodnight Vitor Belfort."

It seems unlikely that Paul – who is unbeaten in four professional fights – would entertain a fight against Belfort next.

The 24-year-old verbally agreed to a rematch with Tyron Woodley after outpointing him last month.

But that is seemingly off the table as Paul wants to fight Tommy Fury, the half brother of WBC heavyweight champion Tyson Fury, in his next fight.

Who should Jake Paul fight next? Let us know in the comments below

He said: "I think Tommy Fury is at the top of that list. He’s skilled, he’s undefeated, and he’s a real boxer.

"He has like four million followers on Instagram which is good engagement. He has the fans from his relationship show [ Love Island ].

“It all starts with the numbers, like would the fight sell a lot? Would people actually care? I could go and fight the infamous jiujitsu guy who doesn’t shut the f*** up on social media, but it’s a hard sell.

"This guy just beat a UFC hall of fame legendary striker, we’re not going to put him up against a jiujitsu guy in a boxing match.

“So after each fight, we go back to the drawing board and we’re like ‘who makes the most sense’ ⁠— can they actually sell pay-per-views? Can we sell this fight as like ‘this is a tough fight for Jake'."