Jake Paul was "bullied" during "traumatic" childhood but boxing saved him 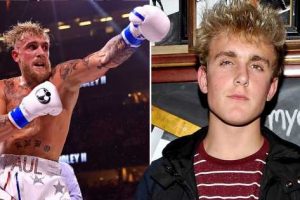 The 'Problem Child', 25, looks set to finally end his long-standing social media spat with Tommy Fury after Smith confirmed that the fight is "90 per cent agreed". Paul was due to fight Fury last December before the ex-Love Island contestant pulled out due to a severe chest infection and a broken rib.

Instead, the YouTuber-turned-boxer faced Tyron Woodley, in a rematch of August's split decision victory, in which Paul claimed the fourth knockout win of his career. First appearing on the boxing circuit for a white-collar contest against fellow YouTuber Deji Olatunji, Paul has amassed a cult following on social media, which started on Vine in 2013.

The American is known outside the ring for his many controversies, having been charged with criminal trespass and unlawful assembly in pursuit of fame. But boxing coach Smith believes hitting the punchbags has "saved his life".

"He told me that boxing really, truly saved his life," said Smith, speaking to Vegas Insider. "The entertainment lifestyle of having fun and partying, stuff like that could be self-destructive to a guy like Jake. Jake’s going to make boxing a career for himself instead because it pays very, very well.

HAVE YOUR SAY! Are you excited for Paul v Fury? Let us know in the comments section.

"And it's something that gives him the freedom to release whatever frustration and anger from his past that maybe he doesn't discuss. Boxing is his outlet, and it has served him really, really well with that. He has a love for training, and he is a true student.

"He's listening. He's so dedicated. He's so invested. And he's someone that invests not just their money and their time, but their every thought and effort and desire. His mentality and his will is so frickin strong.

"I would say Diego Corrales is like Jake. You almost have to kill them to beat them. Jake has that will. I think it [the will] comes from some trauma as a kid in his past. So, there was some bullying going on somewhere, possibly.

"There's a lot of rage and anger or something in his childhood. And that's what normally elevates fighters, like the ones that come from poverty. It's the same kind of drama and anger and abuse somewhere. And they release it into boxing."