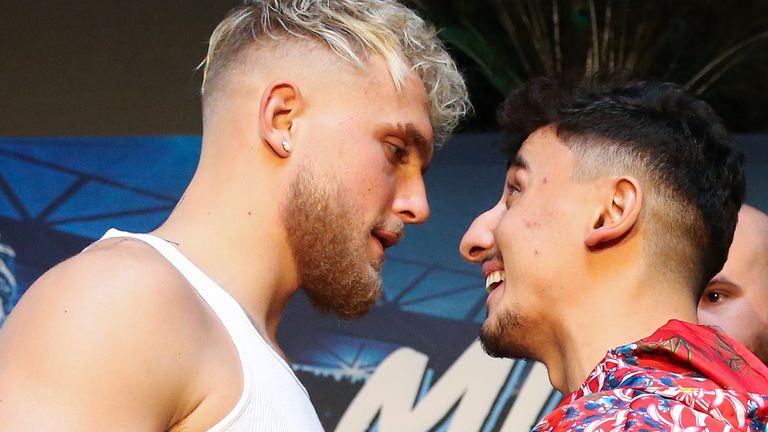 Jake Paul has described AnEsonGib as a “doormat” before he avenges his brother’s defeat to KSI as YouTuber boxing rivalries reached a new level.

Britain’s AnEsonGib playfully pushed Jake Paul during their first face-off on Wednesday night at a press conference before they fight on January 30 in Miami, live on Sky Sports, on the undercard to Demetrius Andrade vs Luke Keeler.

It will be the second professional boxing match between YouTuber rivals promoted by Eddie Hearn, following on from KSI’s victory over Jake’s older brother Logan Paul in November. “Gib is a doormat to me,” Jake Paul said. “Something to wipe my shoes on, on the path to avenge my brother.

“My brother lost due to a two-point deduction. It was a controversial win for KSI. But I have a different mentality. After I beat Gib, KSI will get the smoke. That’s where this is going.

“I’ve fallen in love with the sport and it’s an honour to be on the same card as legends.

“I look forward to knocking this big-nosed kid out. That is the game-plan.” They will make their pro debuts but both have some in-ring experience as amateurs against fellow YouTubers – Jake Paul beat KSI’s younger brother Deji and AnEsonGib has boxed twice.

Jake Paul, for this upcoming fight, is being trained by former world champion ‘Sugar’ Shane Mosley in the iconic Big Bear mountains.

AnEsonGib is trained by Viddal Riley, who previously oversaw KSI to his victory against Logan Paul.

Mosley said: “Jake really wants to knock out KSI because he is really mad. But Gib is standing in front of him.

“Gib has energy but that won’t work with Jake. I think Jake stops him in the third round but maybe earlier.”

Riley replied: “Jake is a better fighter than Logan. So Gib has to be better than KSI was. Shane can’t fight for Jake. Can Jake do what Shane is teaching him?” An argument about their respective social media followings broke out.

Jake Paul said: “You look nervous. Are you nervous? You look scared by your posture.”

AnEsonGib replied: “The man’s platform has fallen. All of his social media has fallen.”

Jake Paul hit back: “My mom has more Instagram followers than you.”

AnEsonGib said: “Where are your 20 million followers?”

The row concluded with Jake Paul saying: “This is the real world. You will be stuck as a YouTuber for the rest of your life.”