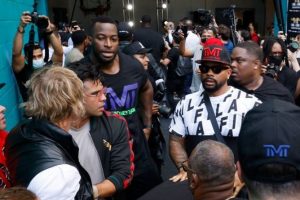 Next month’s bout between Floyd Mayweather and Logan Paul took an early twist after the latter’s brother, Jake, started a brawl when he stole Mayweather’s hat.

Mayweather and Logan will fight on June 6 at the Hard Rock Stadium in Miami, but the tension appears to have already flared, thanks to the presence of Logan’s younger brother.

Mayweather was initially scheduled to fight YouTuber Logan in February, but the bout was postponed due to the pandemic.

It was then suggested that the event would be cancelled completely, but the pair denied the rumour and will face off next month.

And at today’s press conference, Logan’s brother Jake, who also found fame through YouTube, sparked a brawl when he stole Mayweather’s hat.

JUST IN: Tyson Fury makes demand as he weighs in on Saunders vs Alvarez dispute 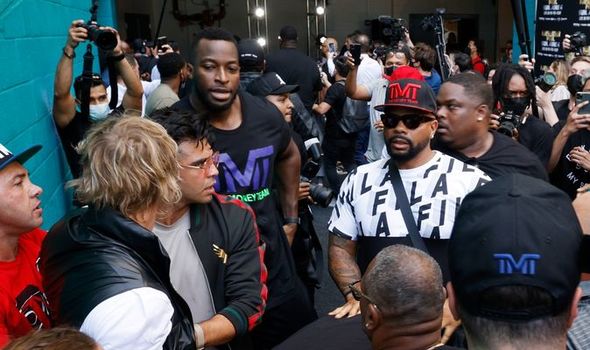 A video of the incident has circulated on social media. Jake and Mayweather are face to face and both can be heard saying: “Let’s make it happen,” in an apparent agreement that they will square off after Mayweather’s fight with Logan.

Jake then suggests: “Let me call Al Haymon,” who manages over 100 boxers, including Mayweather. But Mayweather, who tells Jake to get the paperwork for a proposed fight sorted, claps back: “I don’t need Al Haymon, I’m my own boss!”

In the bizarre video, the 24-year-old YouTube star then grabs Mayweather’s hat and runs off.

The stunt prompted a mass brawl in which Mayweather appears to throw a punch in the direction of Jake, who is pulled to the floor by the crowd.

Jake took to Twitter to comment on the spat. He posted: “I stole his hat because he steals peoples money [sic] with boring fights.”

He also shared a video of the incident, which also shows him promising to steal Mayweather’s hat in the moments before, with the caption: “Went as planned”.

Mayweather, meanwhile, has won all 50 of his professional fights, including 27 knock-outs, in a glittering career.

But Logan is undeterred by the prospect of facing one of the greatest boxers of all-time.

He recently said: “People are asking me if I’m like scared. No, no I’m not scared.

“The feelings I’m getting right now are just excitement.

“I’m excited, I’m blessed to have this opportunity and I think we’re gonna wow a lot of people.

“I just don’t believe I’m gonna get in there and people are gonna see what they expect to see.”

Mayweather has claimed that he will make upwards of $100 million for the fight.

“I can fight a fighter right now and I can guarantee myself $35million,” the 44-year-old said.

“I can eventually probably make $50million, for just a regular fight.

“Or me and Logan Paul can go out, entertain, have fun and make nine figures, $100million or more.”