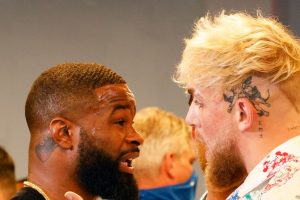 Jake Paul has offered to double Tyron Woodley's purse for their fight this summer – but the former UFC champion would have to pay a big price if he loses.

Woodley will make a career-high purse for this fight, more than for any of his six title fights in MMA's top promotion and Paul has offered to double it if he beats the YouTube star.

But if Woodley were to lose – an outcome that bookmakers currently favour – he would have to give his entire seven-figure purse to a charity of Paul's choice.

The pair went face-to-face for the first time yesterday in Miami in a media event hosted by Barstool Sports boss Dave Portnoy, and exchanged heated words in a four-minute-long face-off.

And in response to Woodley's jabs, Paul responded with the bet offer, saying: "If you're so confident, how about if you win I'll double your purse?

"But if you lose, you have to donate to my charity, put your money where your mouth is."

Woodley's purse may even reach eight figures when he faces Paul, more than any of his six UFC title fights against Robbie Lawlor, Stephen Thompson twice, Demian Maia, Darren Till and Kamaru Usman.

And should he pick up the win, while Paul's bet may not come to fruition, he is expected to rake in another massive payday in the form of a rematch due to a clause put in the contract by the YouTube star's team.

Woodley is already planning to stick around the sport of boxing, and in his new weight class of 190lbs – 20lbs heavier than his MMA weight division.

“I think I box some more,” Woodley told TMZ Sports during the week. “I mean, s***, I want to fight twice this year, so I’ll fight him August 28 and around November I’ll be ready to box again.

"I don’t know exactly who, when, where, what, how, but I know that me going out and really doing work is going to put me in a position to open up other windows.

“Who knows what’s next? This may open up the door for me taking some other fights at different weights, fighting at 190 and then having to go back to 170 is like ‘agh’.

"You know, the amount of money I’m going to make for this fight is going to be quite different from some of the other UFC fights or even different promotions that want to do MMA fights.

"But if you want me to do MMA at 170, now the bag is stupid. The best thing that’s happened in the last 24 hours, I’m smiling that my market value is where it’s at. You won’t put me on the clearance rack. I won’t be on aisle nine.

“August 28, you’re gonna see that my time is not past and you’re going to want to see more of it.”