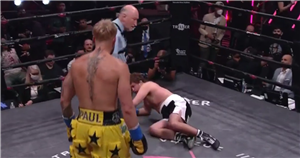 Paul was fighting for the third time as a professional having knocked out first fellow YouTuber AnEsonGib and then former NBA star Nate Robinson.

Having called out Conor McGregor and Nate Diaz, Paul eventually settled on Askren who was making his boxing debut.

The 36-year-old was a former mixed martial arts champion in Bellator before a short and unsuccessful spell in the UFC.

Askren retired in 2019 following his defeat by Demian Maia and later had hip surgery, returning to the gym to prepare for Paul.

But his flabby appearance at Friday's weigh-in raised eyebrows and he started the fight as a firm underdog.

And although he showed more prowess than expected, he was dropped by a one-two and the fight was waved off.

On the undercard, former world champion Regis Prograis earned a bizarre decision win over Ivan Redkach when the fight was stopped in the sixth round when Redkach went down complaining of an illegal blow.

Two of the judges gave the former boxer, who replaced Antonio Tarver at short notice, all six rounds while the other scored the fight 58-56.

Nightclub owner and self-proclaimed billionaire Joe Fournier stopped Colombian reggaeton musician Reykon who failed to climb off his stool for the third round having been dropped twice.

The bout was agreed following an argument over a girl in a Miami night spot and Fournier, who had eight professional wins to his name, ensured he wasn't embarrassed by the debutant.

He said of the finish: " It just kind of came out naturally. I wanted four or five rounds to get my feet back under me honestly. Everyone knows, I’d love Jake Paul next.”