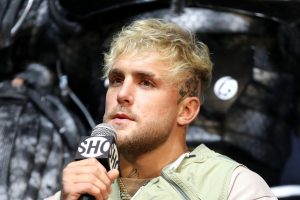 The 24-year-old said he regularly exchanges supportive messages with the Brazilian star, despite not knowing much about football.

Paul rose to fame alongside his brother Logan by making YouTube videos, and both have pursued a boxing career in recent years.

Jake, the younger of the Paul brothers, has won each of his three fights so far by knockout, and will take on Tyron Woodley on Sunday, August 29.

He was promoting the upcoming bout by speaking to TalkSPORT when he revealed his relationship to Vinicius.

He said: "I don't follow [football] at all. I mostly follow the players, but that's about it.

"Vinicius Jr, that's my guy. We both support each other. He DMs me whenever I knock someone out. He's been killing it."

The Brazilian winger has 14 goals in 118 appearances for Real Madrid since moving to the Spanish capital from Flamengo in a £40.5m deal three years ago.

Paul also made predictions about the Premier League, tipping Manchester United, Everton and Liverpool to all win their opening day fixtures.

He anticipates a 2-0 win for the Red Devils against Leeds United, and touted a narrow Everton win in a five-goal thriller against Southampton.

Meanwhile, the American expects a "blowout" when Liverpool take on newly-promoted Norwich City, predicting a 5-0 win for Jurgen Klopp's side.

Paul's professional fighting career began in January 2020 with a first round TKO against fellow YouTuber AnEsonGib, before beating Nate Robinson as part of the Mike Tyson v Roy Jones Jr. undercard later in the year.

He then knocked out MMA star Ben Askren earlier this year and will step into the ring for the fourth time against Woodley, another former UFC fighter.

The Englishman has already threatened to "break every bone in [Paul's] face", but the American accused him of not having "real heart".

Paul told Sky Sports : "This isn't sixth grade. This is the fight business, this is the boxing business.

"He boxes because he was told to do so by his dad. He doesn't have that real heart, that real fighter inside of him.

"If we ever get into the ring, I'm going to expose him."