Inside Lawrence Okolie’s dressing room as he plots cruiserweight domination 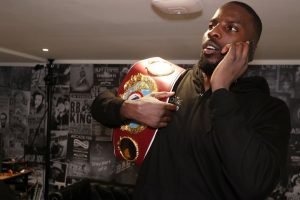 Lawrence Okolie sat with the right hand he had just knocked out Krzysztof Glowacki with in a bucket of ice and acted like little had happened.

He had also become the first of this country's Rio Olympics class to reach the top of the professional sport.

And the unbeaten Brit had done it all in just 16 wins with this being the 13th by way of knockout.

“It feels good but it doesn't feel too big,” he said as he sat in his dressing room. “I feel calm in the moment.”

For the new WBO cruiserweight king this was just another step on the road to bigger achievements which include becoming undisputed champion before moving to heavyweight.

And he wants to do that quicker than Oleksandr Usyk.

One problem there is that the Ukrainian became the fastest fighter to win all four major world titles in a division after just 15 pro fights.

But Okolie has a way around that. His lack of amateur experience compared to the Ukrainian means he can technically do it in less bouts across both codes.

“We only need to have three more,” he said.

“I want to do it the quickest. I know Usyk did it quicker but still, amateur and pro fights is how I'm going to start selling it now.

“I think I've had 40, 41 amateur and pro fights together and managed to become a world champion.”

IBF champion Mairis Briedis is seen as the best 14st 4lb fighter on the planet while there is also WBA title holder Arsen Goulamirian and WBC king Ilunga Makabu to conquer.

“I think it will be easy to get them in the ring because ultimately they are going to look at me as inexperienced, someone will think I'm the easiest world champion,” he said.

Okolie achieved this feat just nine years after he was inspired watching his now manager Anthony Joshua win Olympic gold while he was on a break from working a shift at McDonald's.

The fast-food giant stuck out a post on Twitter to mark their former employee's journey from flipping burgers to knocking out veteran Polish punchers to become world champion.

This was a performance which was far more mature than a fighter of Okolie's experience.

He was patient as he dominated the former world champion through five rounds with his reach advantage, stiff jab and rocket of a right hand doing the work.

Then when the chance came to finish Glowacki in the sixth, he was ruthless with the right to poleaxe the Pole.

“I was really within myself,” said 'The Sauce'.

“I didn't want it to be a back and forth attritional fight so I haven't had to show my grit and determination and my savage side yet.

“Nobody in the boxing ring has managed to bring that out of me.

“Maybe Briedis will bring the savage, we will see.”

Okolie continued to flick through his phone as he spoke, waiting for a message from manager Joshua who had planned to attend but then opted out as he prepares for Tyson Fury.

The Hackney boxer had spoken to his biggest fan, though, in mum Elizabeth.

“I was happy I could do that for her,” he said.

“She was screaming and crying.”

And the celebration after a week in the Covid-19 secure bubble?

“I feel in a good mood but I don't feel overly like celebrating,” he added.

“I will relax, play some Call of Duty and go have a bubble bath.”