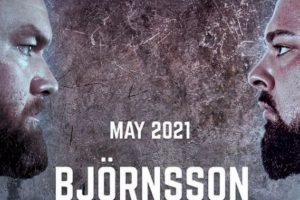 Hafthor Bjornsson has confirmed his next fight ahead of taking on Eddie Hall in August.

The Icelandic bodybuilder, famous for playing Gregor “The Mountain Clegane in Game of Thrones , will fight Australia’s Strongest man winner Alex Simon in May.

It comes four months ahead of his scheduled bout with Hall, in what has been dubbed the “Heaviest Boxing Match in History”.

Bjornsson will come into the bout against Simon with a fight already under his belt, having drawn an adhibition against Steven Ward in Dubai.

But this bout will pit him against a fellow bodybuilder who has a similar body shape.

And the Australian has fighting experience, with a 1-1-0 record in MMA.

Simon had his first Australian Fighting Championship bout in 2018 against Lio Ilalio, which was over in just 11 seconds.

But he was defeat in his second fight against Jack Tuave a year later, taking a massive KO in the first five seconds of the fight.

Bjornsson showed some impressive form against the much smaller and faster Ward earlier this year.

And he will be fired up for September’s colossal clash against Hall, ending a rivalry that has lasted for a year.

The Icelandic bodybuilder took the World’s Strongest Man title from the 33-year-old in 2018.

It has sparked a to-and-fro of trash talk between the giants since Hall’s deadlift record was taken by the Game of Thrones star in May 2020.

And, despite Bjornsson’s showing against Ward, the Brit took the war of words to another level by slamming the whole bout.

Speaking on his YouTube channel, the 2017 World’s Strongest Man said: “Do you want the God's honest truth? He didn't land a single punch in three rounds.

“Anyone with any boxing tenacity about them, will know that was the biggest load of s*** that has probably ever happened in boxing.

“That Steve Ward evidently laid off.”