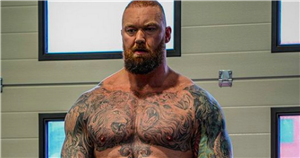 Hafthor Bjornsson has provided a fresh weight loss update ahead of his showdown with bitter rival Eddie Hall in September.

Bjornsson is set to lock horns with Hall in a fight being dubbed the 'heaviest boxing match in history' later this year.

The Game of Thrones star, who played The Mountain in the award-winning TV series, was held to a draw in his first boxing exhibition against Irish cruiserweight Steven Ward back in January.

Now he has switched his focus to a long-awaited clash with Hall in five months time – and ahead of the bout he has undergone a drastic body transformation.

Thor, who typically weighs a staggering 344lbs, is already looking incredibly shredded in training for the grudge match later this year.

Yet despite still eating 7,000 calories per day during training camp, Hall has completed a body transformation of his own, revealing he cut down to 355lbs in the summer.

That is still over two stone heavier than Nikolai Valuev – the heaviest world champion in boxing history.

And Hall's trainer is desperate for his fighter to put his name among the likes of Valuev and cult hero Eric 'Butterbean' Esch, who tipped the scales at a staggering 413lbs back in 2007.

"I give him something to work on, he comes back and he's nailed it.

"We've got him from being like a man who is like a steel bar and quite rigid because of his size – the size is still there – but now he's got a lot of whip in his punches.

"I said to Ed that by the time he boxes Thor, I want him in the position where he's able to box any British heavyweight.

"He's doing ringcraft, technique and by the time he's ready to box this time next year I feel Ed will be able to box any British heavyweight."