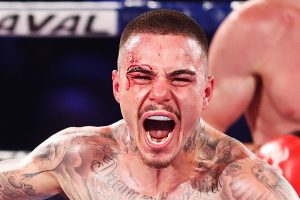 It’s not the $2.7 million payday that excites George Kambosos.

“Yeah beautiful, the money is great, I become the highest paid combat sports fighter in Australia, but it’s not about that,” Kambosos said.

“It’s about taking this guy out, and taking all the belts.”

“This guy” is undisputed, undefeated lightweight champion Teofimo Lopez, and if Sydneysider Kambosos defeats him he will go into the record books.

Only two Australians have ever unified a weight division in boxing; Kostya Tszyu (light-welterweight) in 2003 and Lionel Rose (bantamweight) in 1969.

But like the rest of the world, unbeaten Kambosos was also stunned by his shock windfall.

After Lopez rejected his promoter Top Rank’s offer of $1.9 million for the fight against Kambosos, it went to a purse bid, where newcomer Triller – who put on the Mike Tyson vs Roy Jones Jr bout – made an astonishing offer of $7.8 million for this event, with a venue and date to be confirmed soon.

George Kambosos is set for a mega payday.Source:Getty Images

Under the percentage split, Lopez will earn more than $5 million, and Kambosos $2.7 million, with a fee to be negotiated with his US-based promoter Lou Di Bella.

“Triller came out of nowhere, and good on them because the fighters are the ones putting their lives on the line, we’re the ones entertaining the crowd, fighters should be paid what they deserve,” said Kambosos, who chose to base himself in the United States early in his career and has since fought in the MGM Grand, Madison Square Garden and Wembley arena.

“They shocked the world, the boxing world couldn’t believe what happened. But there will be two shocks in this process; Triller winning the purse bid, and me shocking Lopez to win all them belts.

“I’ve got two young kids, the money secures their future, but my drive is far from money.

“I believe his drive is for money, he’s been very vocal saying ‘I’m worth this much and that much’.

“Well, you got your money. Now let’s see how long you can hold those titles for.

“I’ve been through the trenches for very small money when I went to the US.

“I was making very good money in Australia, people freaked out when I said I’m going to the US. But I didn’t want to be that fighter that got stuck here and brought imports in and built a record, then got a world title fight against a good fighter, got beat and was never heard from again.

“I took the hardest road.

“I’m finally starting to get the recognition I deserve. I’ve gone over multiple times, left my family behind to make these opportunities happen, without those sacrifices I wouldn’t be in this position.”

“The most important thing is taking this kid out,” Kambosos said.

“It’s been the same story all along. So many people have doubted me, they said I shouldn’t go to America at the start of my career, I wouldn’t make, they said I shouldn’t fight certain guys, they doubted and doubted, but still, I am undefeated and No. 1 in the world, I’m fighting the unified champion, the 2020 Fighter of the Year, for all the belts.

“The more they doubt me, the more motivated I get.”