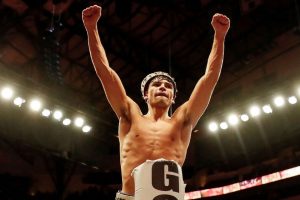 Garcia survived an early knockdown to pick up a stunning seventh-round technical knockout victory over Luke Campbell on Saturday night.

In front of roughly 6,000 fans at the American Airlines Center in Dallas, Garcia won the interim WBC lightweight title with a left hook to the body that sent Campbell to his knees. Campbell attempted to get to his feet by the end of the count, but referee Laurence Cole waved the fight off to give Garcia the TKO win.

For most of his career, Garcia (21-0, 18 KOs), 22, has been known for a social media following that has overshadowed his ring credentials. With the victory, he said he showed he was more than an internet sensation.

“You’re not who people tell you [you] are,” Garcia said in his post-fight interview on DAZN. “You’re who you choose to be. And I chose to be a champion tonight. I wasn’t going to let nothing stop me.”

Campbell (20-4, 16 KOs), a former title challenger and 2012 Olympic gold medalist, was billed as the toughest test of Garcia’s young career and the Briton lived up to that.

In the second round, Campbell dropped Garcia with a looping left hook that caught him on the chin. Garcia said it was the first time he had been knocked down in his career.

“I think I got a little too excited over the moment,” said Garcia, who was carried into the ring seated on a throne while wearing a gold crown.

But “King Ry” responded in the third round by regaining his bearings and nearly ending the fight in the fifth. Garcia hit Campbell with a left hook at the bell that sent Campbell staggering into the ropes. Two rounds later, Garcia picked up the most significant win of his career.

Campbell had never been stopped in his pro career, even in title fights against Vasiliy Lomachenko and Jorge Linares. Garcia noted that feat in the moments following his victory, saying, “I showed today that I’m special.”

Garcia joined the ranks of young, promising fighters in the lightweight division. Teofimo Lopez, 23, won three of the four belts in the 135-pound division when he beat Lomachenko in October 2019. Devin Haney, 22, holds the WBC’s top belt.

But the fighter Garcia said he wants the most is Gervonta “Tank” Davis, 26, who holds one of the WBA’s secondary belts and is coming off an impressive knockout win over Leo Santa Cruz in October.