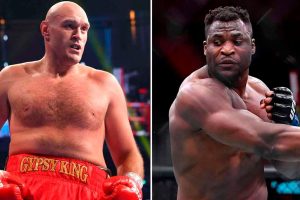 Tyson Fury has laid down the rules for a cage fight against UFC icon Francis Ngannou – and wants Mike Tyson as the superstar referee.

The Gypsy King has earmarked the Ngannou contest as an exciting option should a heavyweight unification showdown against Oleksandr Usyk collapse.

WBC king Fury is poised to do battle with WBA, IBF and WBO champion Usyk this spring as fans wait confirmation on the fight of the year.

But while the venue appears to be the single roadblock delaying the fight announcement, Fury has already identified his fallback plan.

Ngannou, who entered the ring at Wembley after Fury stopped Dillian White last year, has vacated his UFC heavyweight belt and has left Dana White's promotion.

The 36-year-old now wants to take up boxing and Fury is ready to deliver the ultimate baptism of fire – albeit with bizarre mixed MMA rules.

"I am very interested in the Francis Ngannou fight and he is not contracted to the UFC anymore," Fury said in Manchester before Liam Smith's brutal stoppage of Chris Eubank Jr.

“I am interested in that and if the undisputed fight doesn’t get done then I will be looking to take on him, the so-called Baddest Man on the Planet. Who would win in a crossover bout between Fury and Ngannou? Let us know in the comments below

“And we’ll make it interesting, a hybrid fight, maybe MMA gloves and in a cage but with Queensberry rules.

"It would be a colossal event wherever it happens. Me and him in a cage with 4oz gloves on. And maybe a superstar referee like Mike Tyson, just for bants.”

But while the crossover fight against Ngannou clearly intrigues Fury, a bout against the unbeaten Ukrainian Usyk would cement his status as the greatest heavyweight of his generation. And Fury has already billed the future Usyk meeting as the new fight of the century as he looks to targets another shot at history all the belts on the line in an unmissable contest.

Fury said: “This is the fight of the century, they built Muhammad Ali vs Joe Frazier 1 as the fight of that century and there one before that was Jack Dempsey and Gene Tunney, the biggest crowd ever recorded at a boxing show.

“And now Tyson Fury vs Oleksandr Usyk to be the first heavyweight four-belt holder in history.

“There have been undisputed heavyweight champions before, the last was our Lennox Lewis, but that was for the three belts and not four. I will be the first of this era."