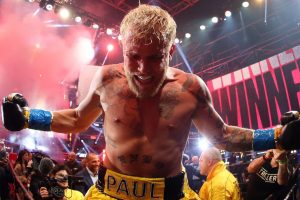 Tommy Fury has aimed another dig at YouTuber Jake Paul by claiming his mother would knock out Ben Askren.

Paul is on the hunt for his next opponent after beating former UFC star Askren earlier this month.

The YouTube star has made an impressive start to his boxing career, having finished his only three opponents so far in side the first round.

But he is yet to face off against a fellow professional boxer, much to the distaste of many boxing fans.

However, Paul could now take on Fury, the brother of heavyweight champion Tyson Fury.

The two have been trading verbal jabs recently, and Paul declared nobody knows who the Brit is.

And now, Fury has fought back by claiming his mother would defeat Paul's last opponent.

He said: "It’s a play-about for me. It’s a good fight for the fans, everyone wants to see him get annihilated, it’d give me a bit more exposure.

“Just send the contracts over, get in touch and we can make the fight no problem.

“It’s not no big thing that needs to be talked about for a year long, it’s not a big fight like Anthony Joshua vs Tyson, it’s not on that level.

“We’ll take the fight. If he sent the contract over tonight, it’d be signed and delivered straight back to him.

“All I see for that fight is easy money against an idiot.

“He makes YouTube videos for a living, he hasn’t been hit in his face in his entire life, he doesn’t know what it’s like to take a shot.

“I’d put my mother in with Ben Askren and my mother would chin him because he’s no good, he’s useless, he’s a wrestler.

“UFC is not boxing. If you’re gonna fight an MMA fighter you may as well fight a chef out of a kitchen because they can’t fight, they can’t stand up.”