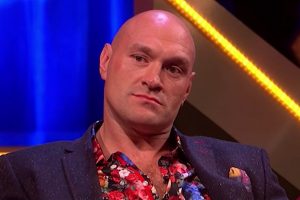 Boxer Tyson Fury has paid tribute to his daughter Athena’s medical staff after confirming that she had been taken off a ventilator.

Athena is the youngest of Fury and wife Paris’ six children having been born on Sunday, but she was soon put into intensive care at Ronald McDonald House, based at Alder Hey hospital in Liverpool.

She spent her first night in the world in the ICU, but was re-admitted into it on Tuesday, with the world champion asking fans to pray for her.

Fury also set up a GoFundMe page to raise money for the Alder Hey Family House Trust as a thank-you for supporting the family.

The boxer will deliver replica WBC belts to two lucky winners once the fund reaches its £50,000 target.

Fans quickly supported the fundraiser, and just five hours after its launch, more than £27,000 had been raised, which Fury described as “beautiful to witness”.

Fury has now delivered a new update on the health of his baby daughter, confirming that while she still remains in the intensive care unit, she has been taken off the ventilator.

The 33-year-old also paid tribute to the doctors and nurses helping to care for Athena in the ICU.

“Update for everyone. Baby Athena is doing well and has had a stable day off ventilator,” Fury posted in a story on his Instagram account.

“Thanks to everyone for the prayers, still in ICU for now. Thanks to all the doctors and nurses. God bless you all.”

Athena is the youngster of the Fury’s six children, with Tyson and Paris already being parents to three sons and two other daughters.

Fury was set to fight American boxer Deontay Wilder last month in a trilogy-completing bout, but that was postponed until October after the Englishman tested positive for Covid-19.