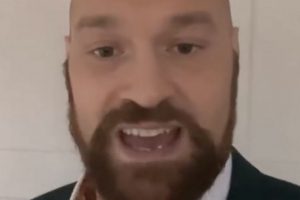 Tyson Fury has aimed a brutal dig at Anthony Joshua by labelling his heavyweight rival a 'bodybuilder'.

Fury, 33, made the jibe in response to claims from Derek Chisora that 'AJ' would 'blast out' his rival should the pair eventually meet in the ring.

Fury and Joshua seemed destined to end years of anticipation in 2021 when they began negotiating a lucrative unification bout, only for Deontay Wilder to take legal action after claiming 'The Gypsy King' was obliged to fight him first in a trilogy bout.

A subsequent court ruling went in favour of the American, leaving Joshua to turn his attention to fighting Oleksandr Usyk.

Prospects of a mouth-watering all British bout in early 2022 instead were then scuppered in September when the Ukrainian proceeded to outclass Joshua in London, taking his WBA, IBF, WBO, and IBO heavyweight belts in the process.

The following month Fury concluded his trilogy fight with Wilder by scoring a thrilling KO win in what proved a fight for the ages – and the Manchester man's next opponent remains unclear with a fight against WBC title challenger Dillian Whyte not set in stone.

Joshua, 31, is lining up a rematch with Usyk, 34, in the spring – a bout he must win to reignite hopes of facing Fury this year.

Chisora this week told talkSPORT that if that were to happen, Joshua would need to go on the attack from the off.

Would AJ have any chance of 'blasting' out Tyson Fury? Let us know in the comments section.

"I'll go with AJ. Yeah! See, AJ's power punch is unbelievable. Wilder didn't know what to do (with Fury)," he said. "He has to just go on him straight away and blast him out. If he tries to box him, he will lose the fight," he said.

Fury responded to that potential notion with laughter, taking to Instagram to shoot down both 'Del Boy' and Joshua.

"This is a message to Derek Chisora, I've just seen that you said you think AJ would blast me out. Never in a million years.

"So Del, he ain't got the bottle to fight Usyk again. Usyk will smash him next time, properly. Never mind beat him on points, he'll knock him out. But listen, it only takes one man like me.

"There's only ever been one man on these shores, and he's called the Gypsy King, AKA Tyson Fury."