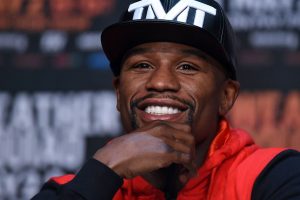 Floyd Mayweather, to many, is the greatest boxer to ever step foot inside the ring, with a record of 50 fights, 50 wins and zero defeats.

Though his upcoming bout with YouTube sensation Logan Paul is an exhibition bout that won't 'officially' have a recognised winner, should he slip up to the viral star, it will undeniably tarnish Mayweather's boxing legacy.

Outside of the sport, Mayweather is a divisive character who has as many people that adore him that despise him.

His love life is well-documented, with the fighter rumoured to have dated everyone from pop star Mariah Carey to A-list actress Lindsay Lohan.

Here are some of the most famous faces Mayweather is reported to have gotten close to during his time in the limelight.

The reports linking the singer to Mayweather stem from the pair's long term friendship, with both of them spotted alongside each other at a number of swanky Hollywood parties.

Their lengthy friendship has been littered with romance rumours, most notably after Mayweather's 2018 birthday bash where the two were pictured getting close as the night drew to a close.

When she is not being linked with a relationship to Mayweather, Carey is an award winning pop & R&B singer who has won five Grammy awards alongside ten American Music Awards and fifteen Billboard Awards.

Who do you think wins on Sunday, Paul or Mayweather? Let us know in the comments section

Lohan's life has been at spotlight from as early as she can remember, having been signed up to Ford modelling agency from the age of three.

She made her television debut at the age of ten and has remained a famous face ever since, most notably starring in big blockbuster films such as Freaky Friday and Just My Luck.

In late 2013, Lohan was pictured sneaking Mayweather into a Casino Halloween party in Connecticut where the duo spent the night dancing and cuddling up to each other.

At the time, Lohan had just finished a stint in rehab while Mayweather was actually engaged, though the pair have since been spotted at the same events, rumours of a budding romance between them ended after that night in Connecticut.

Lil Kim is an American rapper who has enjoyed a lengthy career littered with success, including two gold-standard singles from the debut album Conspiracy by her group Junior M.A.F.I.A.

Similar to Carey, rumours have often lingered over a potential romance between her and Mayweather due to the fact their pair have been close pals for a while.

Lil Kim added further fuel to the rumours when in 2014, the two were alongside each other at the 2014 Soul Train awards and Kim tweeted "Team Us!!! I Love My Baby @Floyd Mayweather!!!."

Better known as Chilli from the hit all-girl group TLC, Rozanda Thomas was part of one of the most successful pop groups of the 90's.

The reports surrounding a potential romance with Mayweather first emerged off the back of Thomas' reality show – What Chilli Wants, on American channel VH1.

The fighter appeared in a string of episodes and the duo appeared to have some kind of chemistry, but Thomas later confessed that they were just friends and any mention of a romance was purely paper talk.

A woman of many talents, Cole is a singer, songwriter and actress whose career began after she met the late rapper Tupac Shakur aged 15 who helped guide her in the direction of A&M Records.

At just 24, she had registered five successful singles from her debut album The Way It Is, which was certified as gold after just 17 weeks and stayed in the charts for over a year.

Rumours over a romance with Mayweather began in 2016, when she was pictured with him around the same time she was alleged to have been going through marital problems with her then-husband Daniel Gibson.

However, just a year later Cole quashed these rumours in a 2017 interview where she confirmed that the pair were just friends and nothing more.