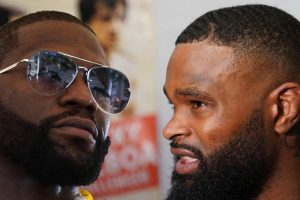 Tyron Woodley has accepted an offer to train with Floyd Mayweather for his fight with Jake Paul.

Former UFC welterweight champion Woodley will step into the ring for his boxing debut against YouTube star Paul on August 28 in his first fight since being released from the promotion earlier this year.

And he will now get the chance to work with one of the greatest fighters of all time after Mayweather reached out to him during fight week for his own exhibition with Jake's brother Logan.

Speaking with media ahead of his fight with the elder Paul brother, Mayweather expressed interest in getting into camp with the former champion.

"Give me Tyron Woodley," Mayweather told reporters. "I'm going to get in camp and I'm going to train him for this fight, I want him to come to Las Vegas and work with us."

And later at his own media day, Woodley responded to the offer, and said that talks have been ongoing behind the scenes between his and Mayweather's people.

"They just texted me 'let's do it'," he explained. "I just talked to them today.

"Why would I not train with the best boxer of all time? He's already my dog, we've been talking about training for a long time anyway so for sure I'm going to take him up on that."

Both Woodley and Mayweather have legitimate beefs with Paul, and will likely make a dynamic duo if Woodley trains at the boxing great's famous Las Vegas gym.

Mayweather and Paul engaged in a violent altercation at the media launch for his fight with Logan, with the YouTube star taking the 50-0 boxer's cap to instigate the brawl.

In the heat of the moment, Mayweather even threatened to kill the younger Paul brother, and the Ohio native has since upped his security detail.

And for Woodley, the issue began in Atlanta a month prior when he cornered close friend Ben Askren to his fight with Paul on Triller Fight Club's debut event.

And in the dressing rooms before the bout, while engaging in the customary glove check between camps, Woodley and Paul, as well as professional boxer J'Leon Love, were involved in a heated debate.

Love taunted Woodley over his lack of experience in the world of boxing, to which the 39-year-old clapped back with a reply about his five UFC title fight wins.

And after Paul stopped Askren in the first round of their fight, with a reported 1.5million pay-per-view buyers, Woodley called out Paul for a match, which was accepted.

The pair squared off for the first time since that night in Atlanta yesterday, at a media event in Miami during the fight week for Mayweather-Paul.

They will take to the ring in a city to be determined on August 28, in the first of a multi-fight deal for Paul with US broadcaster Showtime.