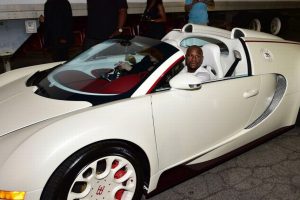 Floyd Mayweather has never been shy about flaunting his wealth on social media.

As the highest-earning boxer of all-time, Mayweather reportedly has a net worth of well over $500m (£360m), and as such, the boxing legend’s Instagram feed is packed with snaps of his private jet, enormous mansions, and designer clothes.

Most recently, the self-proclaimed Best Ever took to social media to show off his newest purchase, a collection of seven all-white luxury cars.

Filming outside of his mansion in Miami, Mayweather panned across his driveway and flaunted the collection, which included two Rolls Royce’s, a Lamborghini, and a Ferrari.

The collection also included a Range Rover, a Bentley, and a Maybach.

While UFC fighter Makhmud Muradov and boxer Devin Haney shared their support for Mayweather in the comments section of the post, boxing fans were less than impressed with the video.

Do you want to see Floyd Mayweather box again? Let us know in the comments section below.

Despite retiring from professional boxing in 2017, Mayweather has continued to rake in extraordinary amounts of cash from his out-of-the-ring activities as well as his occasional exhibition fights.

Most recently, Mayweather made a stunning $100m (£72m) from his bout with social media star Logan Paul, which reportedly did over 1m pay-per-view buys.

While the bout was clearly a lucrative one, it was also hugely underwhelming, with the former five-weight world champion unable to knock out the YouTube star in eight rounds.

Due to the bout’s unique ruleset, no winner was declared and while some suggested Mayweather wasn’t trying at all and could’ve ended the fight whenever he wanted, others argued Paul had claimed the moral victory.

Since the bout, Mayweather has stated that he will never box professionally again but could be tempted to compete in another exhibition bout if the price is right.

A rematch against UFC megastar Conor McGregor or a clash with Paul’s younger brother, Jake, would both undoubtedly be huge events and could well drag Mayweather into the ring one last time.