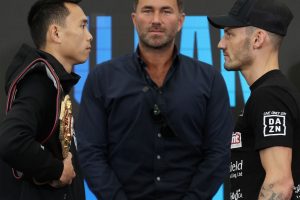 Victory for the Chinese star could see him finally put himself into position to face Josh Warrington providing he comes through his rematch with Mauricio Lara in September in Leeds.

On the other side of the ring, a huge opportunity beckons for Wood as he receives his first world title shot before rival Jazza Dickens who fights on the second week of Fight Camp, despite being defeated by Dickens back in 2020.

Wood could pull of a shock and take the biggest victory of his career, which could set up fights against the likes of Gary Russell and Emanuel Navarrete down the line.

You can follow all the action right here with the main event set to start at around 10.30pm…

The pair faced-off in a intense and fiery glare on stage, as Wood prepares for the biggest fight of his career against the champion.

Eddie Hearn was stood between the pair at the press conference as they both look to try and stake their claim to bigger and better fights in the featherweight division.

So who is going to win tonight?

Xu Can will be slight favourite going into the contest as he looks to set up a potential unification clash with the winner of the fight between Josh Warrington and Mauricio Lara in August.

But Leigh Wood cannot be counted out on his maiden appearance at Fight Camp, with nothing to lose in his first world title shot which he has worked hard for particularly in his explosive victory over Reece Mould last time out.

There is a real variance between the two styles with the Chinese champion posessing great movement, and volume in his shots compared to Wood who is a real powerful combination puncher with a solid chin.

However I would expect Xu Can to box his way to a decision victory going the distance as he will likely try and control the exchanges from the first bell, but Wood has a real-chance in front of a home crowd to unsettle his opponent.

With the champion not having boxed for over a year and a half, I believe Wood has the capability to stop this one with a knockout, but I expect Xu Can to prevail over the distance if the fight reaches the later stanzas.

Betting odds- Can vs Wood

Here are tonight's betting odds ahead of the big featherweight main event.

As you can see Can is the favourite provisionally going into the contest, but Wood's odds suggest he will not be far behind with a close contest expected in tonight's world title headline act.

Wood will be boosted by a crowd in the UK at the first week of Fight Camp, with over 500 people expected to be in attendance so could expect a raucous atmosphere at Matchroom HQ.

Hello and welcome to our coverage of this summer's first Fight Camp show.

Conor Benn was due to take on Adrian Granados tonight but the son-of-a-legend was ruled out after testing positive with Covid-19.

Instead, Leigh Wood takes centre stage as he bids to upset the odds against featherweight world champion Can Xu.