Ex-MMA fighter Tyler East gunned down after shooting his girlfriend 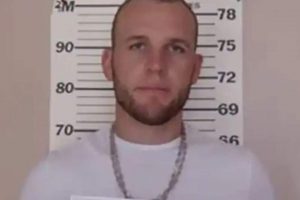 Former MMA fighter Tyler East was gunned down outside his home in New Mexico, America — after he shot his girlfriend during a “domestic dispute”, according to police.

The 30-year-old fighter — whose brother, Cody East fought in the UFC — was fatally shot by a man who saw him violently attacking his girlfriend outside his Albuquerque residence in the suburb of Los Lunas earlier this week, New Mexico State Police said.

“During the dispute, East brandished a weapon, shot his girlfriend, and then dragged her out of the residence,” police said in a release.

“While outside, East was shot by a male subject who was at the residence. East succumbed to his injuries.”

The shooter — who was not identified — “fled the scene” and is still at large, police said.

Tyler East (top) during his heavyweight fight against Prince McLean in 2011.Source:Alamy

East’s girlfriend was taken to an Albuquerque hospital where she is in stable condition, police said, without elaborating on where she had been shot. She was not identified.

East, a 196cm heavyweight, had a 15-6 fight record in numerous organisations, including Bellator. His final professional fight was reportedly a first-round knockout loss at Legacy FC 60 in 2016.

He had a troubled history with numerous run-ins with the law, including previous domestic violence, according to MMA Junkie.

East had been indicted on charges of kidnapping, aggravated burglary, aggravated battery, and bribery of a witness over a 2012 for assaulting an ex while on a “cocaine binge”, the site said.