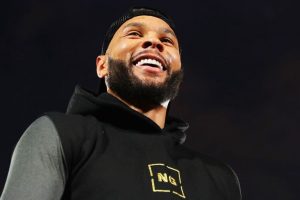 Chris Eubank Jr’s whopping purse for tonight’s domestic dust-up with Liam Smith has been disclosed. The 33-year-old will reportedly earn £2.4million ($3.5m) for the fight, with an £808,000 ($1m) guaranteed purse.

The majority of his add-ons will come from his 60% share of the box office pot with 40% going to Smith. This is an improvement on the Brighton boxer’s last payday against Liam Williams where Eubank Jr made roughly £1.6million ($2m) in total payments with £404,000 ($500k) before add-ons and a 50% split of the PPV.

Meanwhile, Smith is said to earn an estimated £970,000 ($1.2m) in total with an initial payment of £404,000 ($500k). Tonight, the pair headline a stacked card at the AO Arena, Manchester including high-profile match-ups between Richard Riakporhe and Krzysztof Głowacki, Ekow Essuman and Chris Kongo, and Joseph Parker and Jack Massey.

In the lead-up to fight night, both men have made it clear that they do not like each other, but things were taken too far at Thursday’s final press conference. The pair’s conduct is currently ‘under consideration’ by the board after a particularly ugly exchange in which homophobic comments were made.

Smith came under fire after taking a personal swipe at his adversary. “You go on about girls, has anybody in this room ever seen you with a girl? You got something to tell us? You are 33 and you said on the programme you want kids,” shouted Smith.

“This is for no laughs I am just asking, do you want to tell us something? You are putting up pictures with Neymar in limousines. No one in this room has seen you with a women. If you are happy just tell us; it isn’t a dig. You have to have a women to have a kid.”

Taking exception to the verbal onslaught, Eubank Jr replied: “Listen, my private life is my private life. That is irrelevant to the boxing but I am happy and comfortable. What would you like to know Liam? If you want to get personal, talking about being gay? I’ve been told you cheat on your wife. I’d rather be gay than a cheat. If you would like to ask me a question just slide into my DMs.”