Eubank Jr and Smith given conduct verdict after ‘homophobic comments’ 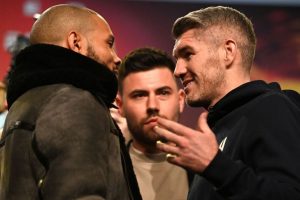 The British Boxing Board of Control has confirmed that Chris Eubank Jr and Liam Smith’s conduct is ‘under consideration’ after Sky Sports was forced to apoligies for homophobic comments made during yesterday’s fiery press conference. The pair square off at the AO Arena in Manchester on Saturday in a domestic middleweight clash.

Both men had exchanged verbal jabs in the lead up to fight week but tempers spilled over at Thursday’s final press event. During one ugly exchange, Smith said: “You go on about girls, has anybody in this room ever seen you with a girl? You got something to tell us? You are 33 and you said on the programme you want kids.

“This is for no laughs I am just asking, do you want to tell us something? You are putting up pictures with Neymar in limousines. No-one in this room has seen you with a women. If you are happy just tell us; it isn’t a dig. You have to have a women to have a kid.”

To which, Eubank Jr fired back: “Listen, my private life is my private life. That is irrelevant to the boxing but I am happy and comfortable. What would you like to know Liam? If you want to get personal, talking about being gay? I’ve been told you cheat on your wife. I’d rather be gay than a cheat. If you would like to ask me a question just slide into my DMs.”

After nearly a year out of the ring, Eubank Jr is hoping to get back on track following the frustrating collapse of his blockbuster showdown with Conor Benn. Benn failed a pre-fight drugs test leading to the entire event being cancelled a day before it was set to take place.

However, the Destroyer has maintained his innocence throughout and recently submitted a 270-page document to the World Boxing Council (WBC) to clear his name. Benn’s promoter Eddie Hearn claims that the 26-year-old has built up a considerable amount of evidence in his favour and is likely to be cleared to fight in late spring, even suggesting that Eubank Jr could end up being his next fight.

But Eubank Jr believes Benn has lost his leeway over the contractual situation and is only willing to face his fierce rival on his own terms now. “Yeah, the fight is twice as big,” Eubank told The Guardian’s Donald McRae. “We would need a stadium with 60,000 instead of the O2. Does he deserve that kind of payday after being caught with illegal substances? Probably not. But it doesn’t mean I’m going to give up that payday.

“And, now, it’s personal. It’s not just about upholding the family legacy. I now actually don’t like this kid. He’s done wrong by me. So, he’s lost all his privileges and bartering power. There are no weight clauses now. There are no rehydration limits. There are no 50% splits. Everything’s in my court now. I’m the only fight people want to see him in.”