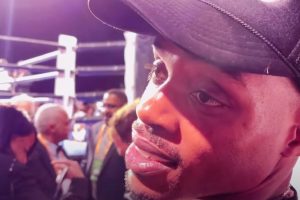 Errol Spence has promised to send Manny Pacquiao into retirement ahead of their welterweight showdown on August 21.

The unified WBC and IBF welterweight champion is seeking a big victory against the eight-division world champion at the T-Mobile Arena in Las Vegas, and to continue his undefeated streak at 147 lbs.

And the 31-year-old has promised to deliver a top-level performance in front of the watching world to show why he is the top man in the welterweight division.

“[A win over Pacquiao] will show everybody why I am one of the best fighters in the world,” Spence told Showtime's Brian Custer while watching Jermell Charlo's undisputed fight.

“And it will show everybody why I am the best 147-pounder in my division.

Spence has been consistently linked with an all-American mega-fight against fellow pound-for-pound top ten fighter Terence Crawford, who has been out of action since his stoppage victory over Kell Brook back in November 2020.

The pair have always exchanged words on social media, threatening for the fight to be made and be one of the biggest recent fights in American history but it has always failed to come to fruition.

But 'The Truth' confirmed his plan is to make the fight happen within the next two years, before moving up in weight as an undisputed champion, but he may have to tackle Yordennis Ugas who is set to feature on the undercard to claim the WBA welterweight title.

"I definitely want that fight (with Crawford), and we’ve just got to make it happen," he continued on Showtime.

"It’s for his guys and my guys to talk to each other and see if it can happen. If it can’t happen, I’ve got to move up.”

Pacquiao has not fought in the ring since he defeated Keith Thurman and Adrien Broner back in 2019, but was heavily linked with a return to the ring against Conor McGregor during the pandemic with his proceeds going to Filipino Covid-19 victims but talks broke down with McGregor instead returning to the UFC.

Spence will reportedly be helped by Floyd Mayweather, who has promised to give the American some tips in how to tactically approach the contest after battling with the filipino twice during his hall-of-fame career.

He said: "I wish both guys nothing but the best," Mayweather told reporters at a media day back in June.

Absolutely, that’s my people – I’m going to always push for my people first.

"Actually, I'm gonna call him and give him some pointers… Pacquiao, he has to fight, I don't. I put myself in a position where I don't have to fight anymore."

Pacquiao has been training with YouTube star Logan Paul ahead of his duel with Spence, after his exhibition clash with Mayweather, and aimed a dig at the American veteran.

Attentions turn to this weekend's action in the boxing world in the heavyweight division, as Joe Joyce takes on Carlos Takam as he looks to set up a world title shot against the winner of Anthony Joshua's world title defence against Oleksandr Usyk.