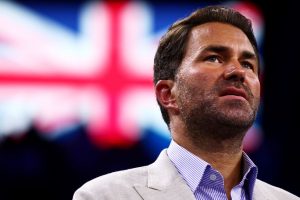 Promoter Eddie Hearn has revealed there is "no chance" Anthony Joshua can meet the contract deadline set by Tyson Fury.

It was revealed this month that Joshua and Fury had agreed an eagerly-awaited fight, which would take place on December 3 in Cardiff.

Last week though, Fury posted a brutal video on Instagram, hitting out at Joshua for failing to sign on the dotted line to confirm their 'Battle of Britain' bout. On Saturday, the Gypsy King continued to hit slam AJ at the Joe Joyce vs Joseph Parker fight, claiming he was "sick of setting deadlines" for his rival to sign the contract.

Fury said: "They had had the opportunity to agree to this fight for about a month. They have had the contract for over a week, still not signed.

'Still a few more excuses they are going to come back with… I'm sick of setting deadlines. They either want this poxy fight or they don't." Hearn, however, is less than convinced with the WBC heavyweight champion's slamming.

He instead believes Fury is taking aim at Joshua to cover up the fact he instead wants to take on Manuel Charr, insisting the contract deadline of Monday is 'unrealistic'. Hearn told Seconds Out: "The conversations have been decent and are moving in the right direction, but there is a long way to go.

"Fury wants to fight Manuel Charr, it's pretty obvious, and the public are not the brightest if they actually think otherwise… I think there is no way this contract gets signed on Monday because there is still a lot to be done.

"This fight takes time. We waited 10 days to get the contract… all of a sudden he wants it signed in 24 hours. No chance."

Hearn seems less than keen to entertain Fury's taunting, giving the realistic response that no contract will be signed on Monday, despite the Gypsy King's demands.

Do you think Joshua vs Fury will go ahead? Let us know in the c omments section below.

"Once again, Tyson Fury has made a statement – 'I'm retired, I'm this, I'm giving my purse to the homeless, I am walking away from this fight on Monday'. Guess what? The fight isn't getting signed on Monday.

"So if you want to walk away from that, while we are all trying to make it – including your promo team – off you go."

Contradicting his promoter's comments, however, Joshua has given fans – and Fury – a positive update on the contract on Sunday evening, revealing on a social media video: "Of course I'm going to sign the contract, it's just with some lawyers at the minute."