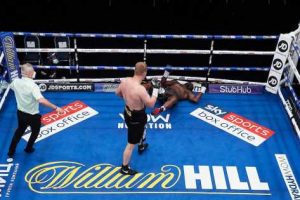 Travel restrictions are behind the decision to move Dillian Whyte’s rematch with Alexander Povetkin back three weeks and to a new location.

Whyte was stunned by Povetkin during the summer with the two having been set to meet again on March 6.

Though they will now collide again on March 27 in Gibraltar with Matchroom Boxing promoter Eddie Hearn explaining why.

Hearn said: "In the current environment we are always having to think on our feet.

“We did everything to try and make March 6 happen, but with the new travel restrictions it was impossible.

“Now we have something outside the box, compelling, and a unique setting for one of the Heavyweight Fights of the Year – roll on the Rumble on the Rock!"

Whyte recently insisted to Daily Star Sport that it didn’t take long to process the defeat to Povetkin.

"I got over it straight away, it's heavyweight boxing," Whyte said. "I'm a heavyweight, I knock a lot of people out.

“I hurt a lot of people in sparring and everyone I've fought has been hurt at some point or knocked down at some point.

“So I understand that one punch can change everything. It wasn't a massive shock, I was just disappointed because it shouldn't have happened.

"Obviously I wasn't happy with the way I fought. But listen, a lot of people sit at home and go, 'Oh my god this is a massive shock, it's this, it's that'. But it's two top guys in the world. It's not an amateur vs a professional.

“Everyone was shocked but I was like relax man, this is heavyweight boxing. All the heavyweight champions before me have lost at some point. That's just the way it is."