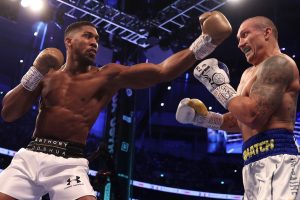 Eddie Hearn has revealed he is "at ease" with Anthony Joshua ’s decision to swap coaches just 12 weeks before he seeks revenge, despite the promoter describing it as a 'huge risk'.

Joshua lost his three heavyweight titles back in September, after he was outboxed by Oleksandr Usyk on home soil at the Tottenham Hotspur Stadium.

As a result the Ukrainian was given a deserved victory on points over the Englishman, however Joshua quickly activated the rematch clause to ensure the pair would meet again in 2022.

Following the defeat plenty of questions were asked of AJ's performance and the work of his coaching team, with many calling for the 32-year-old to make changes for his rematch.

This led Joshua to take a tour around both the United States and Dubai in the hunt for a new coach, with long-standing trainer Rob McCracken said to be the man making way.

Joshua now finds himself just 12 weeks away from his second bout with Usyk, and whilst Hearn believes the Englishman's potential switch up decision is a 'risk', he is still comfortable with AJ's choices.

The promoter said: "It is a huge risk but if you feel like you need a change and you can't go on in a specific way any more, the alternative is much more risky.

"If AJ didn't make any changes and wasn't comfortable with his approach going into the rematch, I feel like we shouldn't be taking that rematch.

"But the fact he's been so proactive and positive and whatever route he goes down, I know he'll be comfortable with that decision.

"I'm a lot more at ease than with the flip side, which is to leave it. He needs something fresh, he's excited. The key thing for him in this fight is being mentally comfortable with his preparation."

It is still unknown as to whether Joshua has cut ties with trainer McCracken, and whilst Hearn revealed the 51-year-old had been involved in 'conversations', a decision is still yet to be made on his future.

Will Joshua win his rematch against Usyk? Let us know your thoughts in the comments section.

Hearn added: "These conversations have been with Rob and AJ," he said. "AJ made it clear when he said 'I will be working with a new trainer'.

"Will that be in conjunction with Rob? I think that's to be announced in the coming weeks."

Whilst the Joshua vs Usyk rematch is set to take place this April, it is still unknown as to where the pair will face off for their second bout.

Hearn however is hoping Joshua can once again fight on home soil following the success of the show put on at the state of the art Tottenham Hotspur Stadium last time around.

The promoter admitted he has received offers from 'two or three' different countries hoping to stage the rematch, but is eager to see it hosted either at Tottenham's stadium again or at Wembley.