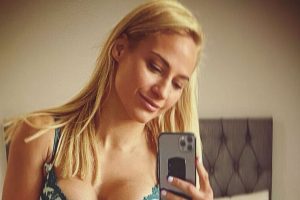 Ebanie Bridges posted a cheeky video to her Twitter followers where she showed off the tightness of her bra.

The Blonde Bomber, 35, took a film of her boobs under a tight-fitted top. She posted a video with the caption: “Who loves summer? I may have forgot how big they are when I ordered this recent bikini.. #sUmMeRViBes.”

And the post has gone down well with her 141.6k followers on Twitter. Upon seeing the video, one wrote: “Sadly I try and take videos like this but my t*** r in my underarms laying on my back “ Another said: “it took 5 seconds for 5k views these guys waste no time.” A third one stated: “That’s a Karcher K5 pressure washer in the background great machine.” A fourth wrote: “Well if its to small, Might as well just take it off.” Someone one else gushed: “What size asking for a friend.”

READ MORE: Ebanie Bridges rips into moany Brits who can't handle sun as she nearly loses it in gym

The current world champion recently lashed out at British people who moan about the heat. The Aussie, who grew up in the far hotter Greater Western Sydney climate, posted on her Twitter account on Friday afternoon her thoughts on the reaction of Brits who complained of the weather, with temperatures of 32°c in London and highs of 26°c in Leeds.

Alongside several laughing face emojis, Bridges blasted: "Ngl [no gonna lie] It’s actually not that hot. "Far out the way everyone’s been carrying on the last few days I was expecting it to be boiling like unbearable. F*** sake haha."

Do you think Bridges should opt for a bigger bra? Let us know in the comments section below

With one follower responded: "Welcome to England! It’ll rain on Sun & we'll moan about it but for now, 'Bloody hell it’s hot! Different kind of heat to Europe'." She replied: "Hahahaha Defs with the repeating hahaha I was in gym today and I was like if I hear one more person say 'bloody hell it’s hot' imma lose it.

She then said: "It’s so funny tbh at first I was a little worried cos yeh I’m use to aircon so we don’t get that bothered by heat .I mean even outside it isn’t that hot maybe I was really expecting it to feel like our 40+ degree days haha."

Bridges won the IBF bantamweight title with a win over Maria Cecilia Roman back in March in Leeds. She has become somewhat a household name as she enjoys wearing lingerie during pre-fight weigh-ins.