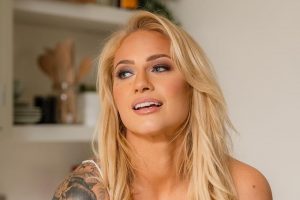 The IBF bantamweight champion is still recovering from the broken hand she suffered when she dominated Shannon O’Connell to retain her title in December. However, her injury has certainly not slowed her down away from the ring, as she regularly teases her thousands of fans with raunchy photoshoots.

Whether it is her cameos with OnlyFans bestie Elle Brooke or her scintillating photo shoots which recently saw her star a teacher, Bridges is delivering on all fronts. And her latest Instagram post is no exception.

Perched on a stool in her kitchen, Bridges sported a low cut, white dress which showed off her beloved breasts. She also asked her fans “Might start a saucy cooking series on my OnlyFans, what do you think?”

It’s safe to say her passionate fanbase are rather fond of the idea. One fan commented, “Beautiful on the inside and out…And fierce. Yes to the saucy cooking series.”

Do you think Ebanie Bridges should begin her own "saucy cooking series"? Let us know in the comments section below

“Nigella will be out of a job,” another laughed, referencing iconic chef Nigella Lawson, before another fan said “Yep, I definitely agree.”

If Bridges' skills in the kitchen are anything like her abilities in the ring, then she would certainly be able to cook up a storm. Bridges has become one of the most popular women’s boxers in the sport over the last few years, shocking and entertaining fans with her razor sharp wit, risque ingerie weigh-ins, and, perhaps most importantly, her relentless fighting style in the ring. Her victory against O’Connell was particularly ruthless, as she made her fellow Aussie bleed with a terrifying flurry of punches in the eighth round. With O’Connell struggling to stay on her feet, the ref ended the bout at that point and handed the victory to Bridges.

Bridges very rarely passes up an opportunity to poke fun at O’Connell, who labelled Bridges a “skanky stripper” before they came to blows in the ring last month.