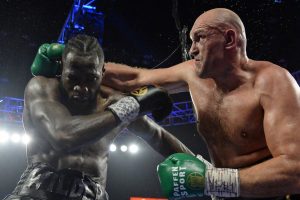 Deontay Wilder has reiterated his cheating claims about Tyson Fury ahead of their trilogy fight – including his theory that the Brit tampered with his gloves.

The pair have met twice before, drawing their first encounter in December 2018 before a February 2020 rematch in which Fury brutally stopped Wilder in the seventh round.

And despite initially appearing to accept the result in the ring, Wilder has gone on to accuse Fury of a number of underhanded tactics including tampering with his gloves, and has implied his own trainer spiked his water.

He has also claimed that his ring walk suit was too heavy and that it weighed him down before he stepped between the ropes.

"Many people in boxing turned a blind eye," Wilder told fans on an Instagram Live stream last night. "That allowed them to do keep their mouth shut – they saw no evil and heard no evil.

"You can't not see that gloves don't bend, your wrist doesn't bend unless you're double jointed or something. It's impossible."

He has also claimed that his former trainer Mark Breland, who threw in the towel in the seventh as Fury was teeing off on Wilder after landing two knockdowns earlier in the fight, was 'disloyal' and prematurely made the call.

Despite being put down twice by the Brit, Wilder added: "We know Fury has no power. He gave me every best of him he had in that ring and I took it all.

"I knew something was not right with my body. He got a rap sheet of cheating and using drugs.

"You talk about a guy like me who's got no rap sheet, just pure power and pure work ethic but I'm lying? And you got a guy who's known for cheating and he's telling the truth?"

Fury has denied all allegations of wrongdoing, and WBC president Mauricio Sulaiman came out in defence of the current champion, saying last year that any theory of Fury cheating would be dismissed.

Who will win Tyson Fury vs Deontay Wilder 3? Let us know in the comments below

“One was in California, the other one was in Nevada. In both cases, there were at least three inspectors in each dressing room.

“I was there before and after the fight. And I saw the hand wraps, I saw them with the gloves. I was in the ring when they came into the ring, and I was sitting right there during the fight.

“At no moment, in either fight, I saw anything that would look suspicious whatsoever. After the fight, they take off the gloves, they are handed to the commission.”

For Wilder's theory about the gloves to be true, it would have to be one of the deepest conspiracies in sporting history with Fury and his coaches, as well as the Nevada State Athletic Commission involved and cameras from multiple television networks turning a blind eye.

The pair fight for a third time on July 24 at the T-Mobile Arena in Las Vegas.