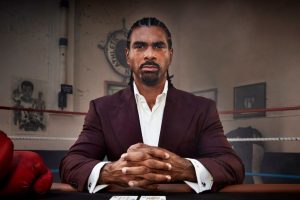 The former heavyweight world champion has not fought since the second of his two defeats by Tony Bellew in 2018.

But he will return in an eight-round professional bout against Fournier on September 11.

The fight will feature on the undercard of Oscar De La Hoya's return to action against former UFC star Vitor Belfort in Los Angeles.

Haye was stopped twice by Bellew in 2017 and 2018 to signal the end of a career which saw him win world titles at cruiserweight and heavyweight.

But he fought just five times after losing to Wladimir Klitschko in 2011 and had shown no appetite for a comeback.

Fournier, who featured on Haye's undercard in 2016, trained with his fellow Londoner in Vauxhall and has amassed a professional record of 9-0.

He was last in action against Colombian singer Reykon in April in a mismatch that was stopped in the second round.

Asked about a comeback last year, Haye, 40, said: "No, definitely not, these young guys are absolute physical specimens.

“And at this time in my life, I’m pretty happy going in and around boxing on the safe side of the ropes because boxing started getting a lot more dangerous for me as I started getting older.

“It wasn’t a difficult decision [to retire] because I’ve been boxing since I was 10 years of age and I was used to winning a lot and as I got older my reflexes slowed down, I got more injuries and I started losing fights that I didn’t believe I should be losing.

“I lost because I wasn’t able to perform at the level that I once did.

“It’s similar to maybe Usain Bolt, he could run at 9.5 effectively and at the end of his career, after three Olympic games and a world championship in the finals, he came second, not because the other guy was a better runner, just because in that stage in his life he couldn’t run at the pace he used to four years ago."