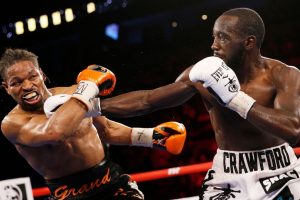 Terence Crawford defeated Shawn Porter by TKO in the 10th round to retain his WBO welterweight title Saturday in the main event of a Top Rank on ESPN+ PPV card in Las Vegas.

Crawford knocked Porter down twice in the 10th round, first with a counter left uppercut and then with a two-punch combination, before Porter’s corner motioned to the referee to stop the fight at 1:21.

Porter (31-4-1, 17 KOs), 34, of Akron, Ohio, entered Saturday’s fight off a unanimous-decision win over Sebastian Formella in August 2020. He was attempting to time world champion at welterweight.