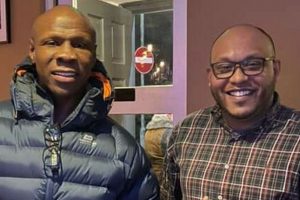 British boxing icon Chris Eubank stunned a Solihull curry house by ordering the same £26 order on five separate occasions in one week – before turning up to thank them.

The former middleweight and super-middleweight world champion became a boxing icon during his 13-year career between 1985 and 1998, forming notable rivalries against Nigel Benn and Steve Collins.

Since taking off the gloves, Eubank has starred on several reality TV shows as well as oversee the promising career of his eldest son Chris Eubank Jr.

Eubank has now hit the spotlight for another reason, having ordered five times from the same curry house in a single week and leaving the manager starstruck after arriving in person.

Eubank visited the Daawat restaurant in Knowle, Solihull this month, having treated himself to five separate takeaway orders in just one week.

The restaurant has revealed that his order consisted of lamb dhansak, stuffed peppers with lamb, samosas, lamb masala and a garlic naan – which according to their website totals as £26.05.

Over five orders, Eubank therefore splashed out £130.25, before giving staff a priceless welcome, and also posed for photos with delighted punters.

Where does Eubank rank in the list of greatest ever British boxers? Tell us in the comments section

Owner Ash told Birmingham Live: "We dropped five orders off to the hotel he was staying at.

"The last one he came personally to say thank you and show his appreciation."

Ash had initially believed that the restaurant had been targeted by a prankster, but realised that the initials CLE were of the iconic former boxer.

He added of a note left on the receipt: "(It said)'Mr Eubank really loved the Lamb Dhansak'.

"I thought 'Mr Eubank?' and I Googled it – on the receipt he put CLE and on Wikipedia it said Christopher Livingstone Eubank, I thought 'that can't be him!'"

Ash added that Eubank may not have been dining alone, due to the size of his order, and said that he 'absolutely hated coriander' to an extent the restaurateur had never seen before.