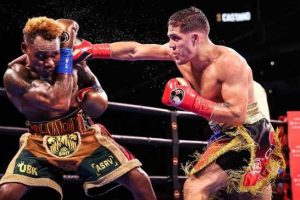 Charlo, who is from Houston, was cheered vociferously throughout the 12-round fight, but it was Castano who was applauded in the end.

“I won the fight definitely,” Castano said through a translator. Then he laid out what he wants in plain English: “I hope there’s a rematch. He’s a great fighter. I want the rematch.”

Charlo, of course, disagreed. He appeared to be conceding rounds to the hard-charging Castano before he landed a fight-altering shot in Round 10 that sent the Argentine reeling for the remainder of the frame.

The three-belt champion swept the final three rounds on all three scorecards to pull out the draw and retain his status as unified champion. Castano remains a 154-pound titleholder as well.

“The draw wasn’t what I wanted to hear,” Charlo said. “I thought I won this fight. … Brian Castano is a tough warrior.”