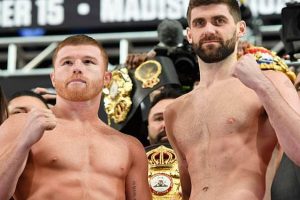 Canelo Alvarez has revealed that his brother was kidnapped just days before his fight against Rocky Fielding in New York, leaving the boxer to spend fight week trying to negotiate his release.

The Mexican pulled out a brilliant performance to stop the Brit in the third round.

The victory is made all the more impressive due to Alvarez's preparations for the fight.

Speaking to Graham Bensinger, he revealed that he started fight week with a call to say his brother had been kidnapped.

Alvarez then had to negotiate for three days in order to ensure his brother's safe release.

Just days later, he climbed through the ropes and unleashed his frustration on Fielding, knocking the Liverpudlian down four times.

Alvarez recounted the incident and didn't hide his anger at those involved.

"[It was] 2018, the Monday before the fight. Over the phone, I negotiated everything for his release," he said.

"For three days I negotiated with those a******s so they would let him go. Three days.

"And after I negotiated, I was still thinking 'imagine if this had been my daughter, my mother, my father'.

"For me, it would have been even more difficult.

"And on top of that, I had to fight on Saturday and [do] a thousand interviews and everything, and no one knew anything.

"That's what I'm getting at, everyone sees me up there and they say 'wow, it's very easy', but nothing is easy in this life, everything is difficult."