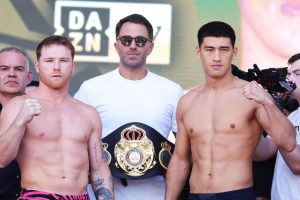 The quest for greatness continues for four-division champion Canelo Alvarez.

After defeating Caleb Plant by 11th-round TKO in November to become the first fighter in the four-belt era to unify all the major super middleweight world titles, Alvarez is facing WBA light heavyweight champ Dmitry Bivol with the goal of unifying that division in the future.

Bivol (19-0, 11 KOs) has defended his title three times since being elevated to full titleholder in 2019. He has height and reach advantages over Alvarez and hasn’t lost a fight since a defeat to former light heavyweight champion Oleksandr Gvozdyk as an amateur almost nine years ago.

In a battle of unbeaten middleweight prospects, Aaron Silva scored a fourth-round stoppage of Alexis Espino.

Silva, a slight underdog, buckled Espino with a left hook, before a flurry of punches led to the referee stopping the fight at 1:17 of Round 4.