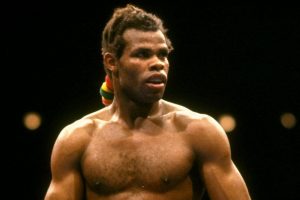 Former British and European boxing champion Kirkland Laing has passed away at the age of 66.

Laing, best known for his historic win over the great Roberto Duran almost 30 years ago, retired from the sport in 1994 with a record of 43 victories, 12 defeats and one draw.

His triumph over Duran in Detroit was the pinnacle of his celebrated 19-year career, but after hanging up the gloves the Jamaica-born Brit spiralled into a life of drink and drugs.

It is believed he blew all of his earnings from that victory before suffering defeat in his next outing against Fred Hutchings.

Nevertheless, while he never challenged for world honours Laing recovered from that setback and won the British title another four times.

He later enjoyed another career-defining bout in 1990, when he toppled Antoine Fernandez to capture the European title.

Most of his fights took place on British soil, but the welterweight also competed in the States, Australia and Italy.

Where does Laing's victory over Duran rank amongst the best British boxing wins ever? Let us know in the comments section below. Laing's passing comes seven years after he fell from a fourth-floor balcony in East London, which saw him rushed to hospital in critical condition.

He was loved by British boxing fans after carving out a successful career spanning almost two decades, in which he locked horns with and toppled one of the greatest fighters of all time in Duran.

'The Gifted One' was a massive underdog heading into that fight, meaning he received Ring Magazine's Upset of the Year award when he prevailed.

A number of boxing figures have paid tribute to Laing on social media after hearing of his passing this week, including legendary British promoter Frank Warren.

Warren wrote on Twitter: "All at Queensberry are very sad to hear news of the passing of former British & European Welterweight Champion Kirkland Laing. Our thoughts are with Kirkland’s family at this time. RIP Champ."