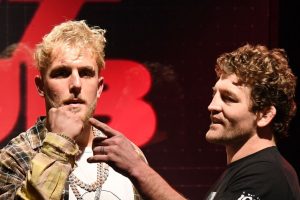 Boxing's polar opposites will be in full view tonight.

On one hand, YouTube star turned professional fighter Jake Paul walks to the ring for the third time when he takes on former UFC star Ben Askren.

He takes a step up against Askren but the mixed martial artist may struggle with boxing's pure striking rules.

Williams, meanwhile, faces a tough challenge as he bids to upset the odds.

Here is everything you need to know about tonight's fights…

What time is the fight on?

The main event will start at around 5am UK time with the first fight of the night kicking off at around 1am. All times are subject to change depending on how long earlier fights last.

How to watch on TV and via live stream

The fights will be streamed on FITE TV in the UK and will not be shown on traditional television. The stream will start at 2am on Sunday morning following the pre-show which starts at 1am. The stream can be purchased for $23.99 (£17) by visiting the FITE TV website.

Who is on the undercard?

"I see myself as an elite fighter right now," Paul said. "A young prospect with a lot of motivation, a lot of hunger and I think people see me as [an] amateur.

"There's sort of a big difference and there's a big gap in between where I'm actually at and what the general audience will think, but I'm excited again to show my ability again on Saturday, against Ben who is a world-class fighter."

"I think most fans are more invested in the results of this bout than I am. For me, I think, actually, the biggest negative comes from winning.

"Because if I beat Jake Paul's ass, I'm gonna be like, world-famous … and I ain't really trying to be world-famous.

"Obviously, I'd like to win, but I don't really think it changes my life a whole lot either way."

What time is the fight on?

The main event will start at around 11pm UK time despite the fight taking place in the US. The fights will begin three hours earlier, at 8pm UK time.

How to watch on TV and via live stream

The fights will not be shown on Sky Sports this week with DAZN streaming them online and to your TV. Subscriptions are still available for £1.99 via the DAZN website. The programme begins at 8pm on Saturday.

Who is on the undercard?

“It’s a risky fight for both of us. He’s the champion and I’m the number one contender.

“If he loses, the belt goes and that’s his status gone. But it’s the same for me, I’m back to the bottom of the pile.

“There’s a lot at stake. Neither of us will take a backwards step and that’s what makes it a great fight.

“The outcome is me winning, whether that’s over the distance or inside the distance, it doesn’t matter to me, as long as I take that belt back to Britain.

“I’m super confident and I don’t think there’s any way that he beats me. I think I can knock him out.”

“I don’t know until I get in there with Williams. They all say they’re going to do something to me, knock me out, beat me up, snatch my belt, they’ve all got a plan until they get hit and then it’s a different story.

“It’s all good, it’s part of the hype, it’s part of their job to do what they need to do to get in their mind but at the end of the day I end up getting mind control over them anyway and we do what we do and get the W.

“I’m very excited, it’s been since January last year since I last put my hands on somebody. We got the knockout against Luke Keeler who was supposed to come and take what rightfully mine. Same thing going on here, I’m back in action in Miami, this is my second home.”