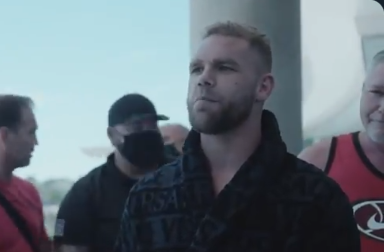 Billy Joe Saunders upped the mind games ahead of his eagerly-anticipated super middleweight showdown against Canelo Alvarez by citing the Mexican’s controversial failed drugs tests during a tense face-off.

The build-up to the unification fight had previously been dominated by controversy surrounding the size of ring that will be in use at the AT&T Stadium in Texas.

Saunders’ father, Tommy, claimed earlier this week that the fight was off with the Brit wanting a much larger ring in order to maximise his speed and give him a better shot of evading one of the most ferocious punchers in the business.

While that issue has now been resolved, Saunders attempted to rile his opponent at yesterday afternoon’s head-to-head meeting by citing the current pound-for-pound king’s chequered history.

Canelo tested positive for clenbuterol in 2017 and 2018, offences which resulted in him being handed a one-year ban which was backdated.