Biggest fighting mismatches ever including time Mayweather made opponent cry 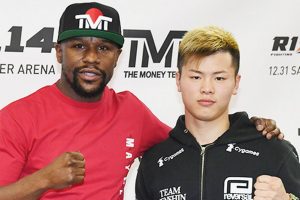 The term 'pound for pound fighter' is tossed around in combat sports – but rarely do the best from polar weight divisions face off.

That's because even weight classes can't stop the occasional mismatch.

Sometimes the mismatches come via cross over fights, like when Conor McGregor switched the octagon for the squared circle to face Floyd Mayweather, or when two fighters have vastly different skill levels.

The difference in skill can often lead to bouts difficult to watch.

Floyd Mayweather loves a headline-grabbing bout – from Conor McGregor to Logan Paul (more on him later).

However, Mayweather's biggest mismatch came in Japan when he took on kickboxer Tenshin Nasukawa in an exhibition bout.

Money brutalised the youngster in such dramatic fashion that Nasukawa burst into tears when he returned to his corner.

The American won the bout in three minutes, and he jetted off back home with a tidy purse.

What do you think of crossover bouts? Let us know in the comments section

Two out of two for Mayweather, and over the summer he took on YouTuber Logan Paul in an exhibition bout.

Paul, who had just one professional fight to his name against fellow YouTuber KSI, stepped into the ring with the undefeated former champion.

However, their rivalry has reignited over the past week with Paul responding to a Daily Star Sport article claiming Mayweather is yet to pay him for the bout.

The UFC rarely engages in crossover bouts, but for the co-main event of UFC 118, they couldn't help themselves.

Seconds into the bout, Couture had Toney on the mat, and he secured victory with an arm-triangle choke halfway through the first round.

It was Toney's only ever MMA bout.

The WWE have had some crazy ideas down the years, but their Brawl for All tournament in the early 2000s stands head and shoulders above the rest.

The concept saw eight wrestlers engage in real boxing fights to be declared the Brawl for All Champion and a Wrestlemania boxing bout against Butterbean.

The result went as expected with the professional boxer brutalising the sports entertainer in seconds with a terrifying knockout.

Another professional wrestler who tried their hand at the real thing, Yuji Nagata, who worked for New Japan Pro Wrestling, stepped into the ring with Fedor Emelianenko.

And despite being battered, Nagata accepted Inoki's invite for a second show against the current the PRIDE Heavyweight Champion.

Nagata was defeated in less than a minute, and he never picked up the phone to Inoki again, or so we think.

Kyle Maynard was born with a rare disease called congenital amputation, which led to the American being born without all four limbs.

However, Maynard has never let his disability stand in his way of achieving something amazing, and he was the first quadruple amputee to climb Mount Kilimanjaro.

However, in 2007, Maynard turned his attention to MMA when he squared off with Brian Frye.

Maynard was prohibited from throwing strikes due to his gloves not staying on his limbs, while Fry, who was the eventual winner, aimed to win without injuring his opponent.

What happens when 600lbs meets 160lbs – or a super-heavyweight stepping into the ring with a middleweight?

It was Takase's, the considerably smaller of the two men, first fight, while Yarbrough had only one MMA victory to his name, and he achieved it by using his weight to smoother his opponent.

After being warned for stalling Takase's attempted takedown, Yarbrough used his weight to fall on top of him.

Amazingly, Takase was able to win when he after unloaded a barrage of punches on the ground.

Back to Japan for a bout that was centred around skill vs strength.

In one corner was Bob Sapp, a former NFL linebacker turned MMA fighter, and in the opposite was Kiyoshi Tamura, a Japanese kickboxing veteran.

Tamura was confident that his skill and technique could overcome his much larger opponent.

Reality, however, was slightly different, and Sapp brutalised the kickboxer in just 11 seconds.

In 2015, after seeing Ronda Rousey dominate in the UFC, Katie Castro decided to give it a go.

Appearing in the octagon at the Xplode Fight Series, Castro immediately looked out of her depth when she appeared in gym attire.

In the aftermath of the bout, the California State Athletic Commission (CSAC) launched an investigation into Xplode Fight Series unsanctioned MMA events.

Dos Caras Jr bout with experienced MMA veteran Mirko Cro Cop has been compared with taking a lamb to slaughter.

It was Caras Jr's first bout in MMA, and he was given a rude awakening when a head kick dropped in inside of the first round.

Amazingly, the destruction didn't turn Caras Jr away from MMA, and he went on to sweep up 15 victories over the span of his short career with just four further losses.

A decade after the mismatch, Caras Jr rocked up in WWE under the ring name Alberto Del Rio, where he had numerous WWE Championship reigns.

In his final days in WWE, CM Punk took on the moniker of 'Best in the World'.

However, after an ugly fallout with Vince McMahon, Punk turned his back on the company and began training to appear in the UFC.

Two years after he started his MMA training, Punk was booked to square off with Mickey Gail.

Gail dismantled Punk with ease, and the defeat even caused WWE to take cheapshots at their former employee on TV a couple of days later.