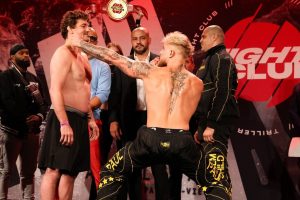 Askren, who has not fought since he retired in 2019 due to injury, appeared out of shape at Friday's weigh-in.

He was criticised by Paul for his apparent lack of preparation having said earlier in the week that he felt his fans wanted him to win more than he did.

And he signed off from social media on fight night by tweeting: "People love fist fights. People love circuses. Hope you enjoy tonight."

Following the weigh-in, Paul predicted he would win by the third round, and said: "I don't believe he makes it out of two rounds; look at the guy, he has a beer belly so he clearly didn't take training camp seriously.

"We all did the talking and the entertainment s*** but now it's time to let the fists fly."

Askren also predicted a stoppage and believes he will win in the seventh and penultimate round.

The former UFC welterweight has added 20lb to his frame for tonight's fight but does at least represent the first combat athlete to have faced Paul.

Paul's previous opponents were fellow social media stat AnEsonGib and former NBA player Nate Robinson, neither of whom survived past the second round.

Askren has never been known as a striker and his pad work has raised eyebrows ahead of tonight's bout.

But he is being paid handsomely with the MMA star taking home at least $500,000 for his troubles, plus his share of the pay-per-view revenue. Paul is guaranteed $690,000 but expects to make millions more.