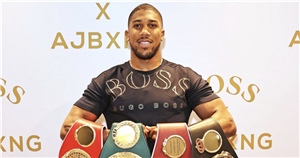 Anthony Joshua and Tyson Fury have just two potential dates remaining as the pair agree to challenge for the undisputed world heavyweight title this summer.

Joshua, who has bounced back from a stunning defeat against Andy Ruiz Jr to reclaim his belts and see off the challenge of Kubrat Pulev, will bring the WBA (Super), IBF, WBO, and IBO heavyweight titles to the fold.

Fury, who won four of the available belts by beating Wladimir Klitschko in 2015, will offer his WBC belt up for grabs following his win over Deontay Wilder in February of 2020.

Fury’s co-promoter Bob Arum has now revealed that while terms have been agreed, there remains a small matter of which date the fight should take place from two possibilities.

The Mirror report that the fight will take place on either June 26 or July 3, with Saudi Arabia the favourite to host the potential £200million showdown.

Arum said: “We’re nearly there. As far as I can ascertain, there are no issues separating the two sides. There has been consensus agreement in all issues.

“We hope very shortly that the fight will be signed. Then we will pick the site and we’ll be up and running.

“I’m looking towards late June or early July for the actual fight to take place.”

The report adds that the hosts are willing to offer Joshua and Fury £72m each to agree to the deal, which could become more than £100m with broadcast revenue.

The victor will be the first undisputed heavyweight champion since Lennox Lewis in 1999, and the pair are expected to announce a second bout shortly after.

Eddie Hearn told the Boxing News Podcast in February: “All the points have been discussed, the contract’s been drafted, it’s been received, it’s going backwards and forwards with minor points.

“I actually don’t see any way this fight falls apart.”